This year, the middle school students at The Moriah School of Englewood, NJ, celebrated Moriah Reads Day with a visit from Michael Wildes, immigration attorney and former Mayor of Englewood, NJ. In anticipation of the day, the students read  Inside Out and Back Again, a novel which centers around a young girl’s experience fleeing from South Vietnam as Saigon falls and traveling to the United States.

As a second generation immigration lawyer, Michael felt privileged to be able to address the students and answer questions about immigrating to America. Michael’s firm, Wildes & Weinberg, P.C., was founded more then 5 decades ago by Michael’s father, Leon Wildes, who is best known for his successful representation of John Lennon in his deportation proceedings, the circumstances of which have inspired documentaries, films, and other literary works. Over the past 50 years, the firm has concentrated its practice in all aspects of U.S. immigration and nationality law, servicing the immigration needs of individuals as well as prominent American and International banks, industrial, financial, legal, and manufacturing corporations in connection with the personnel needs of their foreign national employees.  In addition, the firm has a distinguished clientele and have done substantial immigration work for performing artists, directors, writers, models, actors/actresses, athletes, fine artists, art dealers, curators, and literary agents. Today, the firm consists of more than 40 individuals, all expert in U.S. immigration law, and the multi-lingual staff is spread throughout three offices; New York City, Englewood, NJ, and Miami, FL.

In addition to serving as the firm’s Managing Partner, Michael Wildes served as a two-term City Council Person and two-term Mayor of Englewood, NJ, where he still resides.  For Michael, one of the highlights of his public service was getting to know his constituents, including the young people, and connecting with them outside of the political arena. 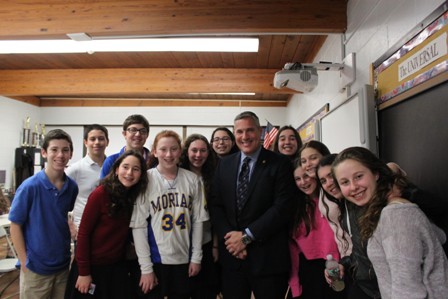