michael wildes attends performance of lennon: through a glass onion

Wildes & Weinberg, P.C. Managing Partner Michael Wildes attends a performance of Lennon: Through a Glass Onion, a tribute to the work of John Lennon starring Australian actor and musician John R. Waters and accompanied by singer-pianist Stewart D’Arrietta.
Lennon: Through a Glass Onion uses many of Lennon’s famous tunes to highlight what was going on through John’s mind as his life was passing before him after being shot. The show is now playing at the Union Square Theatre in New York and is expected to continue through February 22, 2015. 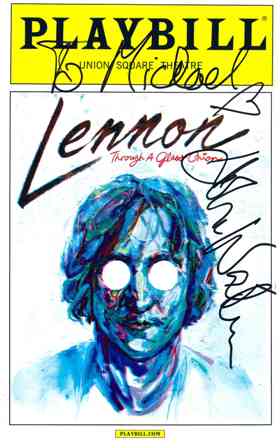 Founded in 1960 by Leon Wildes, the firm of Wildes & Weinberg is dedicated to the U.S. immigration needs of prominent individuals as well as American and International corporations in connection with the personnel needs of their foreign national employees. Leon Wildes is best known for his representation of former Beatle John Lennon and his artist wife Yoko Ono in their struggle to remain in the United States, despite the concerted attempts for the Nixon Administration to deport them. The case, which spanned five years from 1972 -1976, included bringing four separate Federal lawsuits, not only resulted in John and Yoko getting their green cards and being able to remain in the United States, but it also led to substantial changes in immigration law and brought to light secretive government practices and undue political influence, and has resulted in greater transparency in the U.S. immigration system.
More than fifty years since its inception the firm continues to serve a distinguished domestic and international clientele and covers all areas of U.S. immigration law, including employment and investment-based immigration, work permits, permanent residence for qualified individuals, family-based immigration, asylum applications and all temporary and permanent type visas.
In addition, the firm has a distinguished clientele and has done substantial immigration work for investors, scientists, physicians, bankers, performing artists, directors, writers, models, actors/actresses, athletes, fine artists, art dealers, curators, literary agents as well as several more Miss Universe’s.