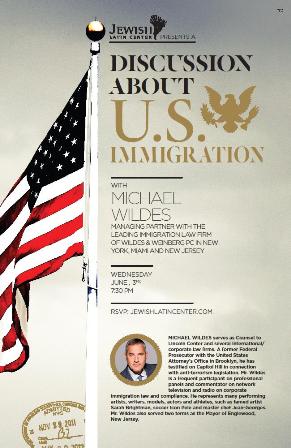 On June 3, 2015, Managing Partner Michael Wildes will lead a panel discussion on U.S. Immigration Law in conjunction with the Jewish Latin Center.  The primary purpose of the center is to build a sense of community for Latin Americans Jews living in New York.  The topics that will be covered during this workshop will include the best way to remain in the U.S. after finishing college or a masters degree, how the H-1B visa works, what  it means to have “extraordinary ability”, etc.

In addition to serving as the firm’s Managing Partner, Michael enjoys being on the lecture circuit and has provided workshops on U.S. Immigration Law to universities, corporations, non-profit and social organizations, other law firms, immigration municipalities, and to the public at large for many years.  As a service to the community, his lectures are free of charge and intended to increase public understanding of immigration laws and how to remain in compliance.  Michael has  previously presented lectures at such noteworthy institutions as Yale University, FIT, Pace University, New York University, Berkeley College, and organizations such as the American Immigration Lawyers Association, Realtors, and other Foundations.

Founded more then 5 decades ago by Michael’s father, Leon Wildes, who is best known for his successful representation of John Lennon in his deportation proceedings, the circumstances of which have inspired documentaries, films, and other literary works, the firm of Wildes & Weinberg has gained a stellar reputation as a full service niche firm. Over the past 50 years, Wildes & Weinberg has concentrated its practice in all aspects of U.S. immigration and nationality law, servicing the immigration needs of individuals as well as prominent American and International banks, industrial, financial, legal,

and manufacturing corporations in connection with the personnel needs of their foreign national employees.  In addition, the firm has a distinguished clientele and have done substantial immigration work for performing artists, directors, writers, models, actors/actresses, athletes, fine artists, art dealers, curators, and literary agents. Today, the firm consists of more than 40 individuals, all expert in U.S. immigration law, and the multi-lingual staff is spread throughout three offices; New York City, Englewood, NJ, and Miami, FL.

To register for the event or to contact Michael Wildes, feel free to email him at michael@wildeslaw.com.