Our Soldiers Speak was founded by Sgt. Benjamin Anthony and is an organization dedicated to educating people around the world about the Israeli-Arab conflict and its peaceful resolution. Sgt. Anthony, a world-renowned lecturer, has served extensively in the Israeli military and utilizes his experiences in his presentations to provide rare insight into the truth about the Israeli military, the Israel Defense Forces, and its involvement in the ongoing Israeli-Arab conflict. His seminars offer a true to life perspective of an Israeli soldier in an effort to educate various audiences about what transpires on the front lines of battle as well as to differentiate the context from which the media extracts the actions of the Israel Defense Force (IDF) and perpetuates miscommunications and false images. 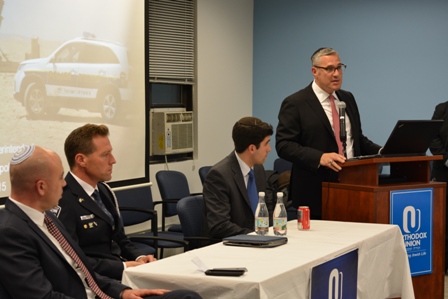 Sgt. Anthony’s presentations take place at various institutions and organizations across the globe and include many leading venues throughout the United States such as regional and national federations, high schools, prestigious colleges and universities, synagogues, business centers, political action committees, and on Capitol Hill. The organization’s mission as a whole is to separate fact from sensationalism, to distinguish between perception and reality, and to compare the media headlines to the truth. 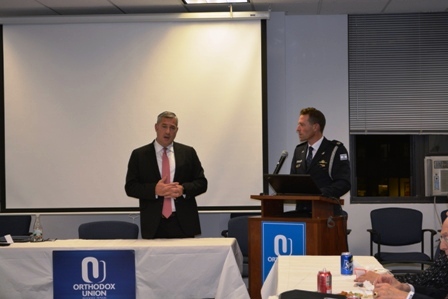 Our Soldiers Speak presents a lecture series seeking to instill a sense of hope and equip future generations with the foresight and ability to avoid these types of conflicts and to promote peaceful resolutions, in addition to facilitating and convening security briefings between active IDF Generals and members of the United States Congress.

In continuing with the mission of the organization, Our Soldiers Speak brought Sgt. Rosenfeld to the United States to address many organizations including the Orthodox Union, an educational, outreach and social service organization which serves the North American Jewish community.

Spt. Rosenfeld  formerly served on  the Israeli Police Forces (I.P.F.) Counter – Terror Unit (Y.A.M.A.M.) and  now serves as the official spokesperson of the I.P.F. His address provided a detailed analyses of Israel’s unique, domestic, security, and terror threats and discussed the methods through which the I.P.F. counters these threats while preserving the security of the civilian population.

Founded in 1960, Wildes & Weinberg continues to be a leading U.S. Immigration and Nationality Law Firm servicing the needs of individuals as well as prominent American and International organizations in connection with the U.S. immigration requirements of their foreign national personnel. The firm’s multi-lingual staff is spread throughout its New York City, Englewood, NJ, and Miami, FL offices. In addition to being the firm’s Managing Partner, Michael also serves as immigration Counsel to Lincoln Center and two international corporate law firms, and is an Adjunct Professor of Business Immigration Law at Cardozo, his alma mater. A former Federal Prosecutor with the United States Attorney’s Office in Brooklyn (1989-1993), Michael has testified on Capitol Hill in connection with anti-terrorism legislation and is internationally renowned for his successful representation of several high profile defectors, whistle blowers and cooperators. Having represented the United States government in immigration proceedings, Mr. Wildes is a frequent participant on professional panels and commentator on network television and radio with regard to immigration law, employer sanction work and compliance.