The Yeshiva University College Democrats invited Wildes & Weinberg, Managing Partner, Michael Wildes to speak to the Club and discuss the importance of local government. The intimate round-table discussion provided an excellent setting for Michael to explain why involvement in local government is critical and to offer advise and suggestions on how to become better informed and involved. 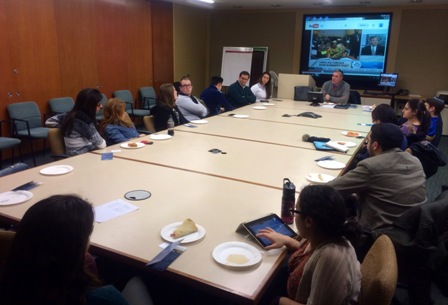 Michael is no stranger to local government. From a young age, he has been committed to public service, beginning as a member of Community Board No. 6 in New York and working his way up to Mayor, in New Jersey. Further, he has volunteered his time to help with many campaigns, was a summer intern for  Congressman Gary Ackerman and Congresswoman Geraldine Ferraro, served as an Auxilliary Police Officer in Forest Hills, began his legal career as a  Special Assistant United States Attorney in the Eastern District of New York, has testified on Capitol Hill in connection with anti-terrorism legislation, is a Certified EMT with Hatzoloh, and is currently a second generation immigration attorney and Adjunct Professor of Law at the Benjamin N. Cardozo School of Law. In addition, Michael has represented the United States government in immigration proceedings and is a frequent participant on professional panels and commentator on network television and radio with regard to US immigration law, employer sanction work and compliance.

One of the attendees at the event, a sophomore majoring in political science, thanked Michael for coming and stated “I was fortunate enough to hear you speak tonight at YU and I wanted to thank you for speaking with us and for everything else you have done in your career. I have been interested in law and politics since I was in elementary school but sometimes get disheartened by the corruption I see associated with them. It’s leaders such as yourself that make me hopeful for a better future and give me the determination to continue in my desired path. I know your time is very valuable and the fact that you took the time to speak with us tonight really means a lot to me. Seeing how you took the time to get to know each of us personally before you spoke had a huge impact on me and I think it really testified to your incredible character. Additionally, I wanted to let you know that when you decide to run for Congress I would love to help you with your campaign in any way I can. I know you are not currently running but is there anything I can do now to help you in the future? I truly hope to see you on Capitol Hill one day. Thank you again and have a great week. I look forward to learning more from you in the future.”

And while it is true that Michael does intend to once again run for public office, for now, perhaps his greatest joy, however is his daily privilege of working with his father, Leon Wildes, who established Wildes & Weinberg, P.C., as a boutique immigration law firm in 1960.  The practice grew out of Leon Wildes’ successful representation of former Beatle John Lennon in his deportation proceedings, the circumstances of which have inspired several movies, documentaries, literary works, and serves as the basis of President Obama’s most recent executive action in the current immigration debate.

To learn more about Michael’s experience as a two-term Mayor, visit www.michaelwildes.org.