Managing Partner Michael Wildes of Wildes & Weinberg
P.C., returned for the second time to The International Culinary Center
(founded as The French Culinary Institute) in downtown New York on Monday, May
6th, 2013 to  provide an informative immigration seminar for
approximately 28 international culinary students.

Mr. Wildes lectured students on U.S. Immigration and Nationality
Law with an emphasis on various types of visa’s (i.e., B-1/B-2 visitor visas, F-1 student visas, H-1B skilled professional visas, E–2 visas, etc) as well as the path to lawful permanent
residence (green card).  In addition Mr. Wildes explained the
procedures of the new automated electronic I-94s that will be implemented by
Customs and Border Patrol (CBP) officials nationwide beginning May 21, 2013 and the effect this change has on foreign nationals entering the U.S. by air or by
sea.

The culinary artists-in-training had many insightful
questions for Mr. Wildes and he was more then pleased to take the time to
answer all of them. 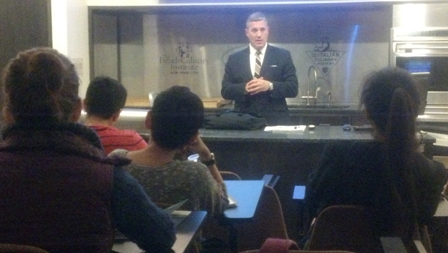