Pictured with Michael Wildes, Managing Partner of Wildes & Weinberg, P.C., one of the premier immigration law firms in the U.S. is Tilman Fertitta, businessman, entrepreneur, television personality and the chairman, CEO and sole owner of Landry’s, Inc., one of  the nation’s largest restaurant corporations.  Wildes & Weinberg has been assisting Landry’s with the immigration needs of their employees for the last few years and recently shared a post regarding their successful representation of  Thomas Winter (Head if their I-Gaming Division) as an alien of extraordinary ability (EB1) which will allow him to apply for permanent residence in the U.S. 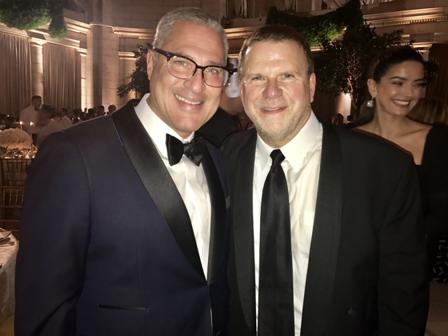 Wildes & Weinberg was founded in 1960 by Senior Partner, Leon Wildes, Michael’s father.  More than half a century later, the firm continues to concentrate its practice in all aspects of U.S. immigration and nationality law, servicing the immigration requirements of prominent American and International firms, banks, industrial, financial and manufacturing concerns, as well as other law firms in connection with the personnel needs of their foreign national employees.

In addition, the firm has a distinguished clientele and has done substantial immigration work for performing artists, directors, writers, models, actors/actresses, athletes, fine artists, art dealers, curators, and literary agents. Most notable was Leon Wildes’ successful representation of former Beatle John Lennon and his artist wife, Yoko Ono in their deportation proceedings, the basis of which has inspired legislation, and has been portrayed in films, plays, and literary works worldwide.