Managing Partner Michael Wildes was recently interviewed by students from Bayside High School in Bayside, New York for an immigration project they are working on. 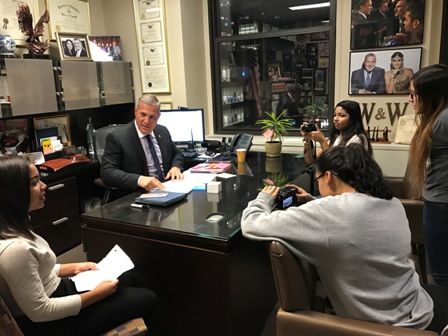 Michael enjoys meeting with and educating students regarding U.S. immigration law.  Moreover, he can often be found on the lecture circuit and has provided workshops to universities, corporations, non-profit and social organizations, other law firms, municipalities, and to the public at large for many years.  As a service to the community, his lectures are free of charge and intended to increase public understanding of immigration laws and how to remain in compliance.  Michael has  previously presented lectures at such noteworthy institutions as Yale University, Yeshiva University, Pace University, New York University, Berkeley College, and organizations such as the American Immigration Lawyers Association, Realtors, and other Foundations.

In addition to running a highly successful immigration law practice, Michael is Of Counsel to Lincoln Center and other international/corporate law firms. A former Federal Prosecutor with the United States Attorney’s Office in Brooklyn (1989-1993), he has testified on Capitol Hill in connection with anti-terrorism legislation and is internationally renowned for his successful representation of distinguished individuals and corporate clients such as performing artists, directors, writers, models, actors/actresses, athletes, race car drivers, fine artists, art dealers, curators, musicians, and literary agents. Some of the firm’s recent clients include First Lady Melania Trump,  famed artist Sarah Brightman, several Miss Universe winners as well as soccer icon Pele and chef Jean-Georges.

Michael  is also a frequent participant on professional panels and commentator on network television and radio with regard to immigration law, and is an Adjunct Professor of Business Immigration Law at The Benjamin N. Cardozo School of Law in New York City.

To learn more about Michael or Wildes & Weinberg, please contact Michael at michael@wildeslaw.com.