Managing Partner Michael Wildes offers session on U.S. Immigration Law to Youthbridge-NY Fellows. Youthbridge-NY is a non-profit leadership development organization that brings together New York City students and offers them skills to cope with the challenges of living in an extremely diverse city. May, 2019.

YouthBridge – NY was founded as “Bridge to Brotherhood” in 1997 in order to facilitate opportunities for high school teens from multi-cultural communities to meet and discuss issues facing New York’s diverse population. After the tragic events of 9/11, the organization rebranded itself as YouthBridge-NY and now is part of the Jewish Community Relations Council of New York.  Each year, 35 high school students are selected to join the 2 year fellowship program which offers leadership skill building training through workshops, site visits, lectures, and experiential learning opportunities. 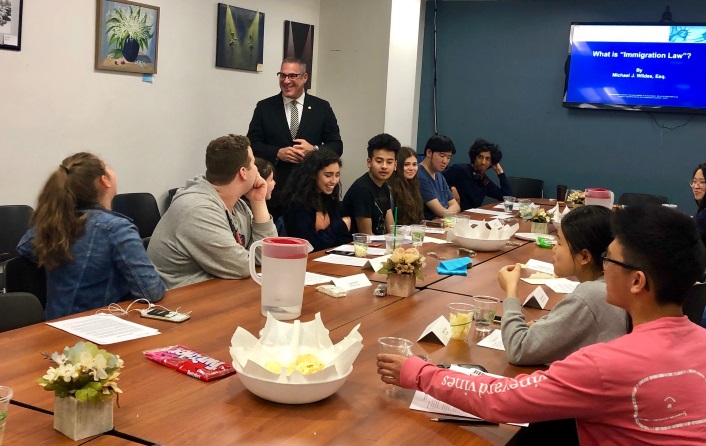 In addition to running a highly successful immigration law practice, Michael was recently elected to his third term as Mayor of Englewood, New Jersey,  is Of Counsel to Lincoln Center and other international/corporate law firms. A former Federal Prosecutor with the United States Attorney’s Office in Brooklyn (1989-1993), he has testified on Capitol Hill in connection with anti-terrorism legislation and is internationally renowned for his successful representation of distinguished individuals and corporate clients such as performing artists, directors, writers, models, actors/actresses, athletes, race car drivers, fine artists, art dealers, curators, musicians, and literary agents. Some of the firm’s recent clients include famed artist Sarah Brightman, several Miss Universe winners as well as soccer icon Pele and Chef Jean-Georges.