Yeshiva University High School for Boys a/k/a MTA is very proud of their Debate Club and the seriousness with which it prepares for competitions. This year, the MTA boys debated the very timely topic of Immigration Reform. According to Murray L. Sragow, Director, College Guidance and Instructor of History, “Each year we attempt to get the best speakers regarding the topic of our debate, so that the students can see what the issues are in real life.  This year our topic is immigration reform, so naturally I thought of Michael Wildes.” 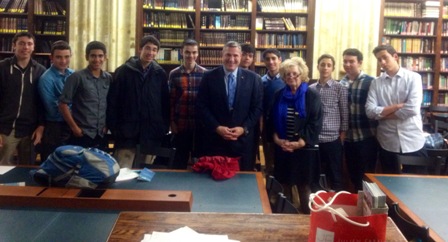 As Managing Partner of Wildes & Weinberg, the boutique immigration firm founded by his father, Leon Wildes, more than 5 decades ago, Michael balances his time between seeing clients, performing acts of community service such as being an EMT, offering free workshops on immigration law, mentoring budding lawyers, making guest appearances on network television and radio as a legal anylst and teaching Business Immigration at Yeshiva University’s Benjamin N. Cardozo School of Law.

Since its inception, the firm of Wildes & Weinberg, a New York City based law firm consisting of over forty individuals,  has concentrated its practice in all aspects of U.S. immigration and nationality law, servicing the immigration needs of prominent American and International firms, banks, industrial, financial and manufacturing concerns and law firms in connection with the personnel needs of their foreign national employees.  In addition, the firm has a distinguished clientele and has done substantial immigration work for performing artists, directors, writers, models, actors/actresses, athletes, fine artists, art dealers, curators, and literary agents.

This past Monday, the YUHSB Debate Team was privileged to be visited by Mr. Michael Wildes, a world renowned immigration lawyer and professor. Mr. Wildes is a former policeman, mayor of Englewood, New Jersey, and employee of the United States Attorney’s Office, who currently practices in an immigration law firm founded by his father in New York City. He is also an adjunct professor at Yeshiva University’s Benjamin N. Cardozo School of Law.

Mr. Wildes honored Yeshiva University High School’s Debate Team with a lecture regarding immigration reform and politics in light of this year’s “Great Debate” topic: “The United States should create a path to citizenship for most undocumented aliens.” Debate team members will argue the pros and cons of this statement in November.

Mr. Wildes expanded his lecture to include opinions and objections of the present students and to allow for diverse branches of discussion which he stimulated, supported, and sometimes refuted. Being an expert in the field, Mr. Wildes delivered a comprehensive message regarding immigration, encompassing immediate and future concerns, economic, social, and moral consequences, political vantage points, statistical analyses, and personal relationships. Furthermore, Mr. Wildes was effective in providing palpable material to students through tales of his own experiences in the field of immigration and related historical phenomena. In particular, Mr. Wildes provided the very interesting theme of juxtaposing modern immigration in America today with similar occurrences in Jewish history, such as in the formation of the Jewish State of Israel, along with personal insights. His valued input has helped enlighten the Debate Team with useful information, ideas, and aspects that will surely be taken advantage of in the Great Debate.

The YUHSB Debate Team would like to thank Mr. Wildes for his time, effort, and positive impact this Monday.