The Yeshiva University undergraduate Pre Law students society invited Managing Partner Michael Wildes to participate once again in its annual Law Fair.  The goal of the fair is to encourage students to explore varying areas of the law, including those which they may not have otherwise considered.  Michael shared with the students first-hand information about his area of law and expertise, U.S. Immigration and Nationality Law. The fair was held at Yeshiva University’s Wilf Campus in Washington Heights, NYC.  The fair was organized by Dina Chelst, Esq., Director, Pre-Law Advising, Undergraduate Academic Advisor, and Graduate Fellowship & Scholarship Coordinator. 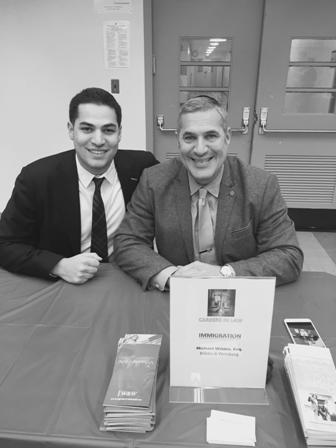 In addition to functioning as the Managing Partner of Wildes & Weinberg, P.C.,  Michael is also an Adjunct Professor of Business Immigration Law at Yeshiva University’s law school, Cardozo, and serves on it’s counsels counsel. Pictured alongside Michael, is his son, Joshua, a senior at Yeshiva University who will be attending Cardozo this Spring.

Michael enjoys being on the lecture circuit and has provided workshops on U.S. Immigration Law to universities, corporations, non-profit and social organizations, other law firms, immigration municipalities, and to the public at large for many years.  As a service to the community, his lectures are free of charge and intended to increase public understanding of immigration laws and how to remain in compliance.  Michael has  previously presented lectures at such noteworthy institutions as Yale University, FIT, Pace University, New York University, Berkeley College, and organizations such as the American Immigration Lawyers Association, Realtors, and other Foundations.

To invite Michael to address your organization, contact him at michael@wildeslaw.com.