Managing Partner Michael Wildes was the guest lecturer at the Polish American Business Club meeting on Thursday, January 11, 2018.  Mr. Wildes presented an overview of U.S. Immigration Law with an emphasis on “hot” topics in light of the current administration. The event was held at the Kosciuszko Foundation, which is dedicated to promote educational and cultural exchanges between the United States and Poland and to increase American understanding of Polish culture and history. 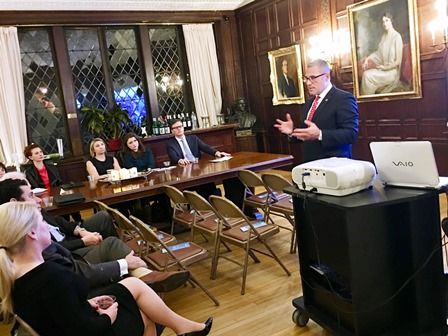 More than fifty eight years since its inception, the firm continues to serve a distinguished domestic and international clientele and covers all areas of U.S. immigration law, including employment and investment-based immigration, work permits, permanent residence for qualified individuals, family-based immigration, asylum application, all temporary and permanent-type visas, naturalization, and Form I-9 compliance. Today, the firm has offices in New York City, Englewood, New Jersey, Miami, Florida and by appointment in  Los Angeles, California.