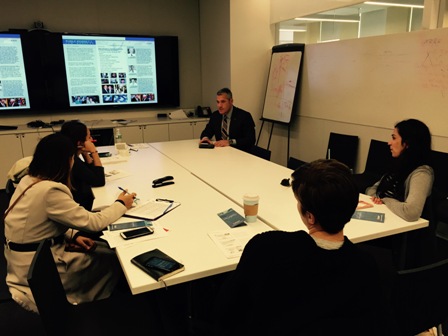 As part of his commitment to community service, Michael headed back to campus in order to provide an immigration seminar to the international students of The New School, NYC. The presentation specifically focused on options for graduating students.

Michael enjoys being on the lecture circuit and has provided workshops on U.S. Immigration Law to universities, corporations, non-profit and social organizations, other law firms, immigration municipalities, and to the public at large for many years.  As a service to the community, his lectures are free of charge and intended to increase public understanding of immigration laws and how to remain in compliance.

Moreover, Michael  is a frequent participant on professional panels and commentator on network television and radio with regard to immigration law, and is an Adjunct Professor of Business Immigration Law at The Benjamin N. Cardozo School of Law, New York.

To schedule an immigration presentation for your institution or organization, contact Michael at Michael@wildeslaw.com