michael wildes reflects on being interviewed by barbara walters

On Friday, May 16, 2014, American broadcast journalist, author, and television personality, Barbara Walters told Her Story , as she reflected on her life and TV career which lasted nearly 50 years.  Among many other things, Walters hosted Today, The View, 20/20, co- anchored the ABC Evening News, and contributed to ABC News. 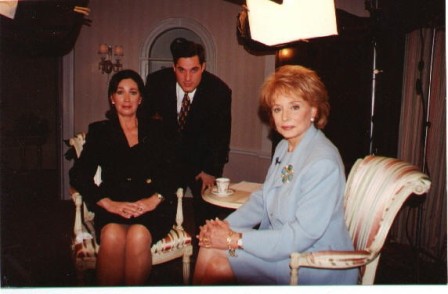 According to Michael Wildes, also a legal analyst and commentator,  who was interviewed by Barbara Walters on many occasions, “Barbara is the consummate lady.  She brought to each interview, her own unique journalistic flare. No one can deny she had an uncanny ability to get to the meat and potatoes of each meeting. Her career has spanned more than five decades and I cannot think of any other journalist who has had such a powerful effect on both the subject of the interview and the audience. From defectors to cases of great international consequence Barbara was the consummate professional. She’d slice through intricate legal migration matters like butter.”
Here Walters is seen conversing with Michael’s client, Mohammed Al Khilewi, a Saudia Arabian Diplomat who asked for assistance with his defection.