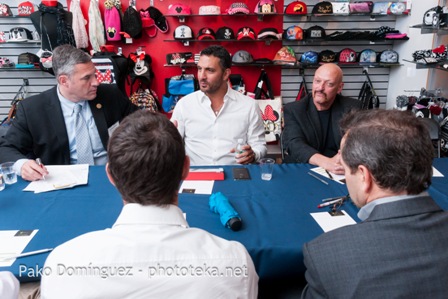 On May 12, 2014, Managing Partner Michael Wildes served as moderator for the YJP’s Presidents Forum. YJP-Young Jewish Professionals is a non-profit New York City based organization focused on providing business, mentoring and educational opportunities for the next generation of Jewish business leaders.
The Theme for the forum was “Building Traction” and Michael was pleased to introduce the guest speaker, Mauricio Umansky.  Mr. Umansky serves as Chief Executive Officer of The Agency, a full service, luxury real estate brokerage and lifestyle company representing clients worldwide in a broad spectrum of classes, including single-family residential, new development, resort and hsopitality, residential leasing, commercial real estate and luxury vacation rentals. (www.TheAgencyRE.com)
Michael Wildes and the staff of Wildes & Weinberg, a boutique U.S. Immigration and Nationality Law firm with offices in New York City, Englewood, NJ, and Aventura, Florida, have a strong commitment to community service and pro bono work.
In addition to running a successful law practice, Michael Wildes is a dedicated public servant.  After winning two terms on the City Council, Michael Wildes was elected Mayor of Englewood, New Jersey, his hometown, in November 2003. He successfully won a second term in November 2006. and soon became nationally recognized in the Democratic Party as a leading fundraiser for Senate and Congressional candidates. He has helped raise money for Senators Edward Kennedy, Hillary Clinton, Joseph Lieberman, and many others. The late Senator Kennedy stated, he has “high expectations” that Mr. Wildes will be joining them in the U.S. Congress in the future. The Democratic Leadership Council (DLC) voted him one of their “100 National Up and Coming Leaders to Watch.”
As a former federal prosecutor with the United States Attorney’s Office in Brooklyn (1989-1993), Michael Wildes has testified on Capital Hill in connection with anti-terrorism legislation. He is internationally recognized for his successful representation of many defectors who have provided difficult to obtain national security information to the U.S. Having represented the U.S. government in immigration proceedings, he is a regular participant on professional panels as well as a frequent commentator and legal analyst on network television and radio.
Michael Wildes was appointed by the President of the United States to the District Appeals Board of the Selective Service System for the State of New Jersey after serving multiple terms on the draft board.  Mr. Wildes taught Criminal Law at Bergen Community College and has been an Adjunct Professor of Business Immigration Law at The Benjamin N. Cardozo School of Law, Yeshiva University, since 2011. He is a regular guest lecturer/panelist at several notable forums and institutions including New York University, Yale University, The Benjamin N. Cardozo, and Brooklyn Schools of Law.
He has served as Chair on numerous anti-terrorist policy and immigration forums including the Rutgers Eagleton Institute of Politics Forum on Immigration and Democracy, was a member of the acclaimed Committee on Present Danger, was Chair of the American Jewish Congress’ Committee on International Terrorism, Vice Chairman of Boys Town of Jerusalem, a member of the B’nai Zion Board of Directors and a member of the Advisory Board for the Urban League of Bergen County. In addition, Michael Wildes is a certified EMT, having secured memberships with Englewood Volunteer Ambulance Corp (EVAC) as well as the Hatzoloh Volunteer Ambulance Corps in New York. From 1982-1992 he walked the beat with the NYPD as an Auxiliary Police Officer.
Presently, he serves on the Board of Manhattan Jewish Experience and WhyHunger in addition to mentoring law students, presenting workshops on U.S. immigration law to universities and organizations, and judging law school moot court and oratory competitions.