In addition to functioning as the Managing Partner of Wildes & Weinberg, P.C., the leading U.S. Immigration and Nationality Law firm, Michael is also an Adjunct Professor of Business Immigration Law at Yeshiva University’s law school, Cardozo.  The Constitution Day event, organized by the pre-professional advisement coordinator, was held at Furst Hall and the topic for discussion was Trapped Between Two Worlds: Children and Immigration Reform. The session focused on the ongoing debate over immigration reform, especially as it pertains to unaccompanied minor children crossing the US/Mexican borders. Michael was asked to address the issue of how the children, many of whom are fleeing from violence and politically unstable countries, should be treated when the reach our shores; should they be detained, denied entry, returned to violent situations, etc.  According to Michael, the U.S. has a “legal and moral duty to provide full and fair opportunities for these individuals to explain what drove them to make the dangerous trek across the border and grant them asylum if they so deserve”. 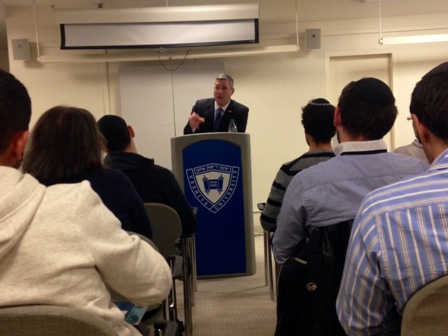 Michael enjoys being on the lecture circuit and has provided workshops on U.S. Immigration Law to universities, corporations, non-profit and social organizations, other law firms, immigration municipalities, and to the public at large for many years.  As a service to the community, his lectures are free of charge and intended to increase public understanding of immigration laws and how to remain in compliance.  Michael has  previously presented lectures at such noteworthy institutions as Yale University, FIT, Pace University, New York University, Berkeley College, and organizations such as the American Immigration Lawyers Association, Realtors, and other Foundations.

More than fifty years since its inception, the firm continues to serve a distinguished domestic and international clientele and covers all areas of U.S. immigration law, including employment and investment-based immigration, work permits, permanent residence for qualified individuals, family-based immigration, asylum application, all temporary and permanent-type visas, naturalization, and Form I-9 compliance. Today, the firm has offices in New York City, Englewood, New Jersey and Miami, Florida. To invite Michael to address your organization, contact him at  michael@wildeslaw.com.