Managing Partner Michael Wildes, also Mayor of Englewood, New Jersey is featured speaker at the 2022 Mayors Summit on Anti-Semitism alongside New York Mayor Eric Adams and Host of International Dignitaries.  The Summit was held in Athens, Greece, home of Democracy. 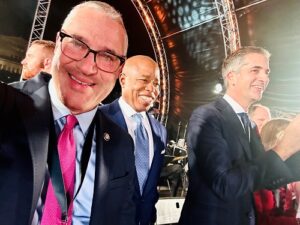 In his capacity as Mayor of Englewood, New Jersey, Michael Wildes participated as a featured speaker at the 2022 Mayors Summit Against Anti-Semitism, which was held in Athens, Greece from November 30th—December 1st, 2022. Other featured dignitaries include the President of the Hellenic Republic of Greece H.E. Katerina Sakellaropoulou, Mayor Kostas Bakoyannis of Athens, Mayor Eric Adams of New York, as well as mayors from across the United States and Europe, and numerous other officials from the international government, human rights, and faith communities.

A partnership with the Combat Antisemitism Movement (CAM), Center for Jewish Impact (CJI), and Jewish Federations of North America (JFNA) – the summit is bringing together municipal leaders from more than 60 cities to share the challenges and opportunities faced in the collective effort against religious hatred and offer innovative and pragmatic solutions to protect and foster Jewish life and build an inclusive and democratic global future, free of prejudice and bigotry, for all humanity. Wildes will lead a segment alongside Deputy Mayor of Malmö, Sweden Roko Kursar entitled Intercommunal Challenges and Opportunities to Ensure Diversity.

Michael Wildes, the firm’s Managing Partner, is also currently serving his fourth term as Mayor of Englewood, New Jersey,  is the author of Safe Haven in America: Battles to Open the Golden Door (which draws on over a quarter of a century of his practice in the immigration field),  is an Adjunct Professor at the Benjamin N. Cardozo School of Law in New York, and serves as Counsel to Lincoln Center and several international/corporate law firms. Wildes is also a frequent guest contributor in numerous print, digital, and television media outlets in the U.S. and abroad, speaking on matters of immigration, civil rights, governmental policies, and more.

For more information on our firm please visit www.wildeslaw.com or contact Michael Wildes at michael@wildeslaw.com for immigration or media inquiries.