BEFORE THE SUBCOMMITTEE ON IMMIGRATION
AND CLAIMS COMMITTEE ON THE JUDICIARY
U.S. HOUSE OF REPRESENTATIVES 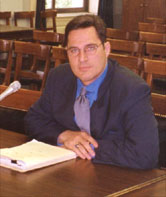 Good morning, Chairman Smith and Members of the Subcommittee. I am pleased to participate in this panel and present you with my initial assessments of Congressman Andrews’ bill regarding the deportation of aliens who associate with known terrorists.

By way of background, I was recently elected to the City Council in Englewood, New Jersey, where I reside.  After spending nearly four years as a Special Assistant U.S. Attorney with the U.S. Attorney’s office in Brooklyn (where I represented the Immigration and Naturalization Service among other federal agencies), I joined my father’s firm – Wildes & Weinberg, which has exclusively practiced in the field of U.S. Immigration, Consular and Nationality Law for the past forty (40) years.  We receive referrals and represent some of the finest individuals and most prominent companies in the world – as they settle themselves and their personnel in our country.

Over the last several years, I have also been retained by several high-profile individuals and whistle blowers who have sought asylum in the United States.  Chief among them are a Saudi Arabian diplomat (Mohammed Al-Khilewi) who defected after walking off with incriminating evidence of international terrorism and espionage; an accused terrorist (Hani Al-Sayegh) allegedly implicated in the Khobar Towers bombing in Saudi Arabia – an atrocity in which 19 U.S. servicemen lost their lives; and most recently a Pakistani nuclear scientist (Dr. Iftikhar Khan) who sought refuge on our shores with alarming information concerning nuclear proliferation and the transfer of nuclear weaponry between Pakistan,  China and Iran.  I considered it a privilege to represent my government at the U.S. Attorney’s office- and have in each of the cases described above – been able to not only protect my client’s interests – but, in turn, these individuals have assisted U.S. law enforcement, furnishing useful information to combat terrorism and curtail nuclear proliferation (without violating the attorney/client privilege).

The rise in international terrorism against the United States, reflected in the recent bombings of U.S. embassies in Africa, highlights the need to provide the U.S. government with the tools to effectively protect U.S. security, prosecute terrorists, and send out a message that will deter further attacks and terrorist activity.

Since the time of the founding fathers, Congress has enacted legislation to protect America from aliens who pose a security threat, beginning with the Alien and Sedition Laws of 1798.  These laws authorized the President to deport “alien enemies” – resident aliens whose countries of citizenship were at war with the United States – and other aliens commonly referred to as “alien friends” whom the President judged to be dangerous to the peace and safety of the United States.

The Department of State has designated seven (7) countries as “State sponsors of terrorism” [Cuba, Iran, Iraq, Libya, North Korea, Sudan, and Syria], and acknowledged that many terrorist organizations still operate there independently, are highly mobile, and possess sophisticated technology.  Dale Watson, Chief of the International Terrorism Section of the FBI, testified before the Senate Judiciary Committee on February 24, 1998, indicating that terrorists regularly employ the Internet and have a growing organizational presence in the United States requiring a stronger investigative and prosecutorial response.  He added that significant numbers of Iranian students (419 in 1997) are admitted yearly to U.S. institutions – many of whom provide ongoing intelligence and technical expertise to the government of Iran.

Reflecting the growing awareness that numerous terrorist organizations operate and raise millions of dollars in the U.S. each year through ostensibly legitimate front organizations, in 1996 Congress passed the Antiterrorism and Effective Death Penalty Act (hereinafter “AEDPA”), which, along with numerous other tools for combating terrorism, provides for a special court for deporting alien terrorists.  The main purpose of the special removal court is to streamline the process of deportation when the mere presence of a suspected alien terrorist in the U.S. is considered dangerous and disclosure of sensitive information and sources under normal immigration procedures would pose a risk to U.S. national security.

Since its enactment, the AEDPA has allowed for the deportation of immigrants based on secret evidence and imposes criminal and immigration sanctions against anyone who provides support, even humanitarian aid, to a foreign group labeled by the U.S. State Department as “terrorist.”  While the AEDPA is a significant legal tool and deterrent – – it will take time for it to work.

The use of confidential information against aliens concerning national security matters has also been approved by the United States Supreme Court, and authorized by regulation or statute since the 1950’s.  Congress has expressly approved the use of classified information in recent statutes, and several Department of Justice regulations allow the Immigration and Naturalization Service (INS) to present relevant classified information, or secret evidence, in deportation proceedings.

Congressman Andrews’ proposals are aimed at targeting those who “knowingly aided and abetted” an individual engaged in terrorist activity.  It is well known that many radical organizations have established fictitious non-profit institutions through which monies have then been channeled to purchase weapons and fund terrorist operations.

Terrorists must not be allowed to hide under the cloak of legitimate organizations or be able to avail their resources to facilitate terrorist activities.  My own experience, having represented an alleged terrorist, gave me first-hand experience in dealing with matters involving our national security.  These individuals know what buttons to push in order to come to our country.  Once they land on our shores, many are able to bootstrap themselves onto safe legal ground and protect themselves in ways Congress never intended or could imagine.  Ostensibly people can enter the United States on various visas and escape scrutiny.

Terrorists may now have settled anywhere in our country.  Many terrorist organizations have, in fact, created smaller cells of operations and have associates who collaborate with one another in order to provide refuge and, in fact, share their resources.  Some foreign dignitaries and diplomats stationed in the New York and Washington, DC area support terrorists, have provided diplomatic cover to known terrorists, and might themselves be considered “associates of terrorists.”  In another matter, we learned of diplomats who were able to smuggle in weapons and make-shift bombs, through their diplomatic pouches.  This provision would provide a legal nexus to curtail these activities.

Moreover, Congress has promulgated similar measures in the past.  In another case, a pro-bono matter in which I represent Patricia Roush – a woman whose children were kidnapped by her husband and taken to Saudi Arabia (after she was given full custody by American Courts) – – we were successful through the efforts of Senator Feinstein in passing H.R. 4328 (passed 10/9/98) in amending the Immigration and Nationality Act rendering aliens inadmissible to the United States if they support an international child abductor, provide him or her with material support or safe haven, etc.

The Courts will continue to delineate (through case law) their standards of “reasonable suspicion.”  Provided law enforcement is required to prove to a Court an actual nexus between the alien’s conduct and the knowing aiding and abetting of terrorist activity – I believe the provision will withstand judicial/constitutional review.   Moreover, Congress has provided a number of procedural safeguards in order to assure due process for the alien, such as the right to counsel, the right to present evidence, the right to confront witnesses, the right to receive a summary of classified evidence, and the right to appeal orders of removal.

Civil libertarians, in their efforts to declassify source information, have claimed that alien terrorist removal court proceedings are sufficiently similar to criminal trial proceedings and feel that the aliens should receive similar due process procedural safeguards.  Other civil liberties groups are calling for the government to prove its case against the suspected alien terrorist by “clear and convincing evidence” – a much higher standard of proof.  However, since deportation is legally considered by the Courts to be a much lesser deprivation of liberty than incarceration, and historically has been considered civil rather than criminal, in nature – the same level of procedural safeguards might not be constitutionally required.  This is consistent with Congress’ historic plenary power vis-à-vis aliens and the Supreme Court ‘s concept of a sliding scale of rights wherein citizens are afforded more privileges than aliens.

The government clearly has an interest in prosecuting associates who aid and abet terrorists, maintaining the secrecy of highly sensitive intelligence, protecting the identity of its sources and avoiding compromising ongoing investigations.  One can foresee situations in which alien terrorists or their associates could obtain classified information detailing what the U.S. knows about their organizations simply by purposely inviting deportation proceedings by the special removal court.

Critics have also claimed that these matters have singled-out Muslims.  The overwhelming majority of Muslim immigrants to the U.S. are law abiding, and the critics should be assured that the INS and the U.S. government have no policy of singling-out Muslims for deportation.  In fact, the great majority of those deported by the INS are not Muslims.  Although the 25 aliens against whom classified evidence is being used in deportation proceedings are Muslims, this simply reflects that the most active global terrorist organizations against the United States in recent years have been militant Muslim organizations, such as Hamas, Islamic Jihad, and groups supported by billionaire terrorist Osama bin Laden.

Although terrorists act with a blatant disregard for life, we, as Americans, must continue to distinguish ourselves as a moral compass for the world community, and in our removal of these vicious individuals and their associates, still temper our actions with democracy and due process.

I believe that Congressman Andrews’ proposal, the current alien terrorist removal court statute and other statutes allowing the use of classified information against suspected alien terrorists – reflect an adequate balance between our interest in preserving an individual’s due process rights and our need to protect our national security.  Since the bombing of the World Trade Center, we have developed a greater appreciation for the increasing magnitude of terrorist groups, and their insidious methods of operation.  We must now protect our citizens from those who would aid and abet their activities and movements. I am confident that the Courts will strike the proper balance in construing these laws, and am grateful that we have these provisions of law – these weapons – to help combat terrorism.