michael wildes to be featured speaker at seminar on immigration issues

In conjunction with the Community of Friends in Action, Wildes & Weinberg, P.C. Managing Partner Michael Wildes will be the featured speaker at a public seminar on Immigration Issues, February 23, 2015.

Family and Friends of the Community of Friends in Action are invited to hear from Michael Wildes, Esq., well-known immigration specialist, on Monday, February 23, 2015, 7:30pm, at the Grace Evangelica Lutheran Church, Broad and Homestead Streets, Palisades Park, NJ.  Michael will be discussing President Obama’s Immigration Plan: Deferred Action for Parental Accountability (DAPA) Program; Deferred Action for Childhood Arrivals (DACA) Program; as well as other immigration related topics. Michael will be joined by one of his bilingual senior staff attorneys, so bring questions.

Prior to joining Wildes & Weinberg, Michael was a former Federal Prosecutor with the United States Attorney’s Office in Brooklyn (1989-1993).   Mr. Wildes also served as a two-term City Council Person as well as a two-term Mayor of Englewood, New Jersey, where he resides.  In addition, he often appears as a legal commentator/analyst for network television and radio and is an Adjunct Professor of Business Immigration Law at the Benjamin N. Cardozo School of Law in New York 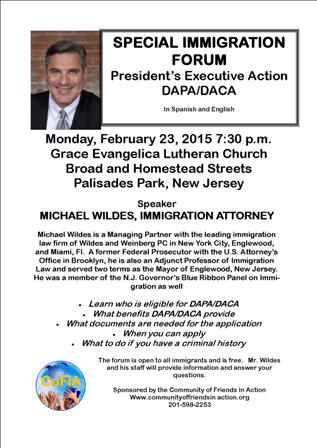