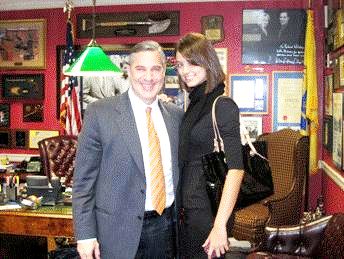 Fernandez and Mendoza made history last year when Fernandez was crowned by Mendoza, an outgoing compatriot.  Fernandez’s win marks the only time in competition history that the same country has won the crown in back-to-back years.  Similar to his work with , Wildes will be assisting Fernandez secure residency in the .  Fernandez was referred to Mr. Wildes by .

Mr. Wildes has become internationally renowned for having represented the United States government in immigration proceedings, for the successful representation of several defectors who have provided hard-to-obtain national security information to the United States and, most recently, for obtaining an injunction to prevent Libyan leader Muammar Gaddafi from residing in New Jersey during the 2009 UN Summit.

Mr. Wildes holds a bachelor’s degree in political science from and a J.D. from Cardozo School of Law. Elected Mayor of Englewood in November of 2003 and to a second term in November 2006, Wildes was voted one of the “100 National Up and Coming Leaders to Watch” by the Democratic Leadership Council (DLC), and the late Senator Kennedy said he had “high expectations” that Wildes would soon be joining him in the United States Congress.

Founded in 1960, Wildes & Weinberg P.C. is the premier law firm in the concentrating exclusively on the immigration and nationality field.  The firm grew out of the practice of Leon Wildes, Esq., a distinguished immigration practitioner in who also represented a Miss Universe winner, Rina Messinger, in 1976.  Its original clientele consisted of individuals, rather than corporations, who had been placed in deportation or exclusion proceedings or were otherwise in jeopardy.  The practice expanded steadily as word of its outstanding achievements in individual cases spread in the international community (including the firm’s representation of former Beatle John Lennon in deportation proceedings), attracting clients from around the world.  Today the firm consists of thirteen attorneys, all experts in the field of immigration and nationality law, with two dozen staff members in its and offices.  The firm is known for its prompt and efficient service.  Despite its steady growth over the past 50 years, the hallmark of the law practice remains the individualized attention to its clients’ needs.