Managing Partner and Englewood Mayor Michael Wildes recently spoke on issues regarding Immigration at the Monmouth County Court House Municipal Advance/Retreat. Mayor Wildes presented the executive summary of Governor Corzine’s Blue Ribbon Advisory Panel recommendations to the state on a variety of issues pertinent to immigration policy in New Jersey. Mayor Wildes has served on the Blue Ribbon Advisory Panel of Immigrant Policy since August 2007, when he was appointed by Governor Jon S. Corzine. Mayor Wildes’ effort in modifying existing guidelines has led the way for reform in New Jersey, and sets an example for the rest of the nation. The recommendations of the committee are sure to bring about many positive changes in the way we view immigration laws in America.

Mayor Wildes provided a general overview of the U.S. immigration system and went into great detail with regard to the potentially dire immigration consequences of criminal convictions, including the difference between “crimes of moral turpitude” and “aggravated felonies”.  He also described what relief may or may not be available in these and other similar situations under present immigration law.

Mayor Wildes  then  discussed personal concerns with regard to recent affairs in Palisades Park (which is a well known muster zone for day laborers) and recent challenges facing neighboring communities and residents  with regard to  dealing with their immigrant population. Formal word on the Governor’s Panel’s recommendations awaits the Governor’s personal review and comments.

Mayor Wildes is a former federal prosecutor and is currently an immigration attorney/managing partner at the Immigration Law Offices of Wildes & Weinberg.

For further coverage on this event, please see the New Jersey State League of Municipalities website at: http://njslom.org/immigration-concern-addressed-052409.html. 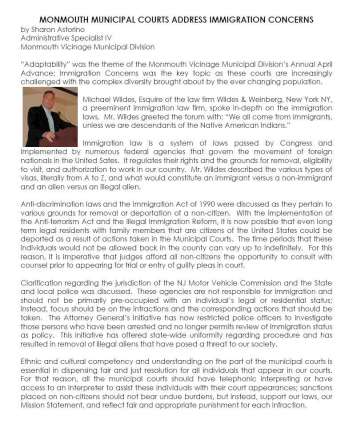