America’s Racing Team to Debut in 2011 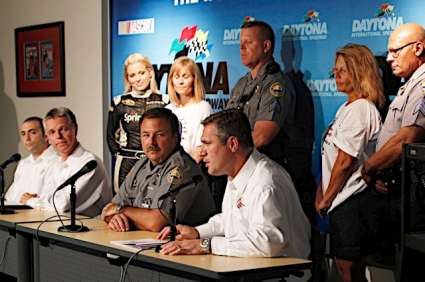 Daytona Beach, Florida (July 2, 2010) – NASCAR fans all across the country will now have one team to pull for: their team, America’s Racing Team. After multiple large-scale quantitative and qualitative studies, the creation of America’s Racing Team (ART), a NASCAR Sprint Cup team formed primarily from “Team Partners,” was announced today live on NASCAR.com from “The World Center of Racing,” the Daytona International Speedway. America’s Racing Team will be the first team in the history of NASCAR to be largely bankrolled by the fans.

The announcement was made by Michael Wright, serving as America’s Racing Team’s Chief Marketing Officer, and by Daniel Webber, part of the ownership group that has helped form ART. Also present were special guests including service men and women from the Daytona Beach area.

Wright, a 20-year veteran of global sports marketing agency IMG and former agent for four-time NASCAR champion Jeff Gordon, announced that America’s Racing Team will enter the No. 76 during the 2011 NASCAR Sprint Cup season beginning next February at the “Great American Race,” the Daytona 500. The team will rely on “Team Partners” to help fuel the team in 2011.

In true NASCAR fashion, this concept was the brainchild of a family of experienced business veterans from the world of sports and live entertainment, the Webbers. A resident of New York City, son Daniel Webber’s business ventures include SuperVision Media, which provides groundbreaking 3-D coverage of events and has worked with The 2010 FIFA World Cup, Formula One Racing and ESPN. His father, John Webber, spent over two decades at IMG, working with international sports and entertainment figures including racing legends Sir Jackie Stewart and Ayrton Senna. Daniel’s mother, Diane, is a noted sports lawyer whose clients have included many leading drivers and teams on Formula One and IndyCar circuits.

“Sometimes the best concepts in business are the most obvious ones, the ones that are so obvious that no one takes the first step to bring them to reality,” said Daniel Webber. “America’s Racing Team is not only a concept for the fans, but one by the fans, one they asked for and helped craft via our extensive research and concept testing. Creating a team that they can literally help build and manage, from the ground up to the winner’s circle, will be the ultimate experience not only for the fans but also my family, which has been involved in racing around the world for many years.”

Also present was Michael Wildes, a former federal prosecutor aand mayor, part of the team’s ownership group who has (and his law firm) represented many top names in sports and entertainment, including Greg Norman, Virginia Wade, Gisele Bundchen and John Lennon.

“I was driven to lend my energetic support to America’s Race Team for two reasons. First is the business model, which gives fans of any age and businesses of any size a level of proprietorship not seen in racing or any professional sport. Second is the stated mission of its ART’s Foundation. It is determined to give back in ways that will not only further the education of individuals but benefit society at large, with the technical learning and innovations it champions. As a long time sports fan who has worked with some of its biggest names, I immediately saw the innovation of the approach and quickly jumped on board with my voice and financial support to make it a reality.”

The announcement of the team today allows time for fans of all ages to begin their immediate Team Partnership into the America’s Racing Team No. 76 entry. Annual memberships begin at $44.95 for children, $49.95 for teens and $299.95 for adults. Small businesses may also join the team’s “76 Pit Club” for a membership fee of $1,999.95. Family memberships, two adults and two kids, are available for $499.95. Fans can begin their membership at the website http://www.americasracingteam.com/ sign-up for annual, three-year or five-year memberships.

“This is not an individual’s team, not a team wholly focused on a star driver or branded by one large corporate brand; this is a team financed and fueled by and for the fans,” said Wright. “This isn’t a current team, but rather one that the fans will help build from its infancy and watch win races in what hopefully will be a very short time. Today is the beginning of their partnership into something very special.”

The team also announced Elton Sawyer is assisting as a competition advisor to America’s Racing Team. Sawyer works with the team after coming from Evernham Motorsports and most recently Red Bull Racing where he helped build that organization into a winning team. Ownership is currently working to establish a team headquarters in the greater Charlotte area. The team is currently securing a technical partnership with an existing Sprint Cup organization to bring together the best operational personnel, including a crew chief, crew members and a driver.

“This is the opportunity for fans to be with a team from its first chassis purchased to the last lug nut tightened before rolling onto the track,” said Sawyer. “They can be a part of a true launch, the most exciting experience in NASCAR.”

Team Partners will be allowed unique benefits of the sport, including input of driver selection to paint schemes. They will also receive unique team gear and merchandise as well as enjoying discounts on NASCAR tickets and accommodations. The team is proud to announce its first commercial partnership for team partners, the Dale Jarrett Racing Adventure.

“All of us at Dale Jarrett Racing Adventure look forward to welcoming partners of the new America’s Racing Team to our thrilling racing experience,” stated Tim Shannon, President of Dale Jarrett Racing. “We’re proud to be a promotional partner of the No. 76 team as it prepares to race in the 2011 Daytona 500.”

Fans will be seeing a lot more from America’s Racing Team in the coming weeks and months ahead. The team will debut TV commercial spots on ESPN and SPEED as well as national radio ads. The team already has a significant online presence including a website and Facebook and Twitter accounts for fans to learn more information about the team and how to get involved. All fans are encouraged to visit www.americasracingteam.com to become a partner of the team today.

Fueled by the most passionate fans in all of sports, America’s Racing Team is the first team in NASCAR’s history to be built and fueled by NASCAR fans. Created in July of 2010, America’s Race Team is a Team Partnership team competing at NASCAR’s highest level, the Sprint Cup Series. The team will make its on-track debut in February 2011 at the Daytona 500.