Martin Boersma, Stunt and Fight Director and Instructor assists Wildes & Weinberg, P.C., Managing Partner, Michael Wildes, during his Business Immigration Law class at The Benjamin N. Cardozo School of Law in order to give a first hand narrative and explanation on O visas.

Michael Wildes is halfway through his 4th year teaching Business Immigration Law at The Benjamin N. Cardozo School of Law in New York City (Michael’s alma mater), a position his father held for 33 prior years.  In order to demonstrate first hand, what it means to qualify for an O visa, Professor Wildes brought Martin Boersma, the firm’s client and recipient of an O-1B visa to meet with his students.  The firm was able to secure an O-1B visa approval for Mr. Boersma, based on his extraordinary ability in the arts as an actor and as a director and instructor of stunts and fights on stage and screen. 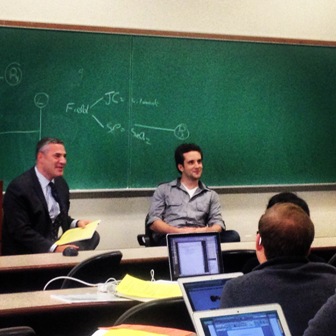 Beginning his career in his native Canada, Martin Boersma has developed an international reputation of excellence based on his remarkable work on stage and screen. A member of the prestigious Academy of Fight Directors of Canada, Martin quickly rose through the ranks of certification within the organization, and became one of the youngest certified fight instructors in Canada. He has taught numerous classes and workshops in the stage combat arena, including at the MACE Winter Wonderland Workshops and Hollywood Stunts NYC in New York. Martin has starred as an actor and as a fight director in numerous award-winning films and theatrical productions, and has been lauded in several noteworthy publications for his remarkable work.

Martin looks forward to continuing his career in the United States. He will be working on several exciting projects pursuant to his O-1 visa, including such projects as Trafico, La Familia, and The Crusader. He has also been engaged to serve as the instructor of several stage combat courses throughout the New York area, including at Hollywood Stunts NYC.

For more than five decades, the firm of Wildes & Weinberg, has concentrated its practice in all aspects of U.S. immigration and nationality law, servicing the immigration needs of prominent American and International firms, banks, industrial, financial and manufacturing concerns and law firms in connection with the personnel needs of their foreign national employees.  In addition, the firm has a distinguished clientele and has done substantial immigration work for investors, scientists, physicians, scholars, bankers, performing artists, directors, writers, models, actors/actresses, athletes, fine artists, art dealers, curators, and literary agents.