our client alfio to perform at the cutting room 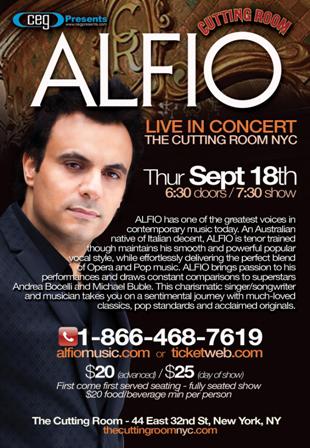 An O-1 visa is a classification of non-immigrant temporary worker visa granted by the United States to an alien “who possesses extraordinary ability in the sciences, arts, education, business, or athletics, or who has a demonstrated record of extraordinary achievement in the motion picture or television industry and has been recognized nationally or internationally for those achievements,” and to certain assistants and immediate family members of such aliens. The present 0-1 extension will allow ALFIO to continue to perform throughout the U.S.
ALFIO has performed at well-respected musical venues in Australia, Asia, across Europe and the U.S. He has composed many note-worthy songs, appeared on television and radio shows, and released several albums. Alfio is considered one of the great voices in contemporary romantic music, with a repertoire of many love songs and fans throughout the world. This opera tenor is named to be reminiscent of a young Dean Martin. He is well known for the beautiful musical tribute he composed, “The Power of One: 9/11 Unity and Hope”, which was released on the 10th anniversary of 9/11. He composed this song in honor of those who lost their lives and loved ones on that tragic day.
ALFIO is sponsored for the 0-1 by Nina Bueti of Magic Beam Entertainment. Upcoming performances include the Nelson Mandela Children’s Hospital concert, “Legacy of Hope”, in December 2013.
Over the past 54 years, Wildes & Weinberg, P.C. has concentrated our practice in all aspects of U.S. immigration and nationality law, servicing the immigration needs of prominent American and International firms, banks, industrial, financial and manufacturing concerns and law firms in connection with the personnel needs of their foreign national employees. In addition, Wildes & Weinberg, P.C. has a distinguished clientele and have done substantial immigration work for performing artists, directors, writers, models, actors/actresses, athletes, fine artists, art dealers, curators, and literary agents including John Lennon and Yoko Ono, Joe Cocker, Johnny Rotten, Paloma Picasso, the 2011,2010, 2009 and 2008 Miss Universes, supermodel Giselle Bundchen and Sarah Brightman, the world’s bestselling female classical artist of the twenty-first century.