“founding partner leon wildes, on the “workings of the immigration law” department of justice, circa 1972

, Founding Partner on
the “Workings of the Immigration Law” Department of Justice, Circa
1972.Sol Marks, the INS District Director in 1972, expressed his continuing
respect for distinguished immigration lawyer, LEON WILDES, despite the fact
that Marks had to admit in federal court that he was instructed by his superiors
in the Nixon administration to deport Wildes’ famed clients, JOHN LENNON and
YOKO ONO LENNON, for strictly political reasons.  Wildes overcame the
Nixon edict and secured lawful permanent residence status for John and Yoko.

Senior
Partner , Wildes &
Weinberg, P.C., selected the best immigration lawyer by Super Lawyers
(2006-2012) is known to be a strong advocate for his clients.

Founded
in 1960, , the son of
immigrants himself, established Wildes & Weinberg, P.C. in a small one-room
office in .
The practice expanded steadily as word of its outstanding achievements spread
in the international community. One of ’
best known accomplishments was his successful representation of
singer/songwriter John Lennon in his widely publicized deportation proceedings,
the circumstances of which have inspired several films and documentaries.

Over
the past 54 years, the firm has continued to concentrate its practice in all
aspects of
immigration and nationality law, servicing the immigration needs of prominent
American and International firms, banks, industrial, financial and
manufacturing concerns and law firms in connection with the personnel needs of
their foreign national employees.  In addition, we have a distinguished
clientele and have done substantial immigration work for performing
artists, directors, writers, models, actors/actresses, athletes, fine
artists, art dealers, curators, and literary agents including Joe
Cocker, Johnny Rotten, Paloma Picasso, the 2011,2010, 2009 and 2008 Miss
Universes, supermodel Giselle Bundchen and Sarah Brightman, the world’s
bestselling female classical artist of the twenty-first century. Despite
difficulties currently being encountered in dealing with
immigration authorities, Wildes & Weinberg, P.C. has maintained an
extraordinary track record for success in its  cases.

Shown
here, is yet just another example of ’
fine character.  U.S. Department of Justice Immigration and Nationality
Service District Director Sol Marks acknowledged, that Mr. Wildes does not
“hesitate to stand up and be counted” when it comes to expressing thanks to the
thousands of Immigration Service employees who “discharge their duties daily
with zeal and humanitarian concern”.  Mr.  Wildes, along with his son
(the firm’s Managing
Partner), continues to remain an active participant in Wildes & Weinberg,
P.C., and is considered a scholar in the field of immigration law. He formerly
served as President of the American Immigration Lawyers Association (“AILA”)
from 1970 – 1971. 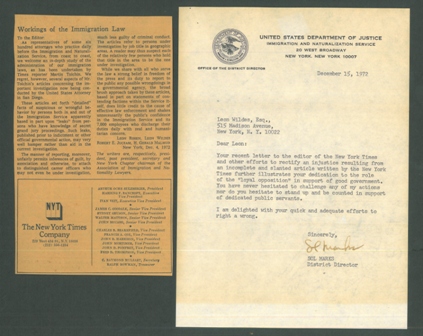