In honor of the 19th anniversary of the passing of Ruth Wildes, late wife of Wildes & Weinberg Senior Partner Leon Wildes and mother of Managing Partner Michael Wildes, the community was invited to hear words of inspiration from Rabbi Dr. Meir Y. Soloveichik. 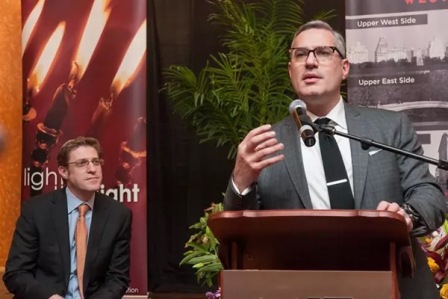 The event was held on December 10, 2014 and was sponsored by Manhattan Jewish Experience (MJE), a non-profit organization founded by Rabbi Mark N. Wildes in 1998. Rabbi Wildes is Leon Wildes’ son and Michael Wildes’ brother.

More than 200 guests attended the event as a testimony to the prominence of the illustrious speaker. 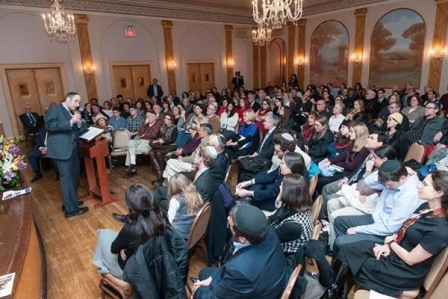 Rabbi Soloveichik is an American born Orthodox Rabbi, noted editor, writer and author, and a dynamic speaker. He is the son of Rabbi Eliyahu Soloveichik, grandson of the late Rabbi Ahron Soloveichik and the great nephew of Rabbi Joseph B. Soloveitchik, the late leader of American Jewry who identified with what has become known as Modern Orthodoxy.  Having Graduated from Yeshiva College in New York, Rabbi Soleveichik received his rabbinic ordination from RIETS, The Rabbi Isaac Elchanan Theological Seminary affiliated with Yeshiva University.  Rabbi Soloveichik was a philosophy of religion student at Yale University Divinity School and received a PhD in Religion from Princeton University. Initially the resident scholar of the Jewish Center in New York, where MJE is housed, Rabbi Soloveichik then went on to become the Associate Rabbi at Congregation Kehilath Jeshurun, also in New York, and since May, 2013, he is the Rabbi of Congregation Shearith Israel, a Sephardic synagogue in New York. In addition, Rabbi Soloveichik  is the director of Straus Center for Torah and Western Thought at Yeshiva University. Rabbi Soloveichik exemplifies the synthesis between Torah wisdom and scholarship with intellectual vibrancy and worldliness. He has lectured throughout the United States, in Europe and in Israel to both Jewish and non-Jewish audiences on topics relating to Jewish theology, bioethics, wartime ethics, and Jewish-Christian relations.

MJE, the organization which sponsored the event, is a cutting edge program for young Jewish professionals in their 20’s and 30’s, with little or no background in Judaism who are interested in connecting more to each other, to their community, and to Judaism. MJE is a place where young men and women can explore Jewish life and meet new people in a wide range of inclusive, engaging and innovative programs for thousands of young Jewish professionals, including parties, an annual ski trip, classes, beginner prayer services, marching in the Israel day parade, Friday night dinners and much more. MJE was founded in memory of Ruth B. Wildes z”l.  For more information about MJE, click here: http://www.jewishexperience.org