Wildes & Weinberg, P.C. Managing Partner Michael Wildes and his wife, Amy, attend Englewood Night Market, a block party like no other on July 16, 2014. 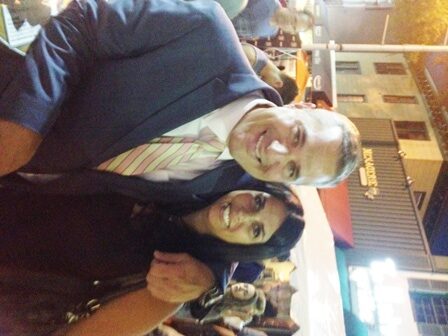 Michael Wildes wears many hats, although here he is pictured without one.  His CV is filled with law enforcement, volunteer, and civic memberships, in addition to his legal and professional career.
In 2004, after serving two terms as Englewood, NJ’s second-ward councilman, Michael successfully ran for Mayor, a position he also held for two terms. Regarding his night out on Palisade Avenue, Michael said “it was a glorious evening, one that was spent with good friends and family in my beloved hometown of Englewood; it reminded me of the many Englewood Day events I helped orchestrate in Mackay Park.”
In fact, when Michael decided to expand his law offices, he looked no further then downtown Englewood. The firm’s main office in New York City was founded in 1960 by Michael’s father and the firm’s Senior Partner Leon Wildes, who is most well known for his successful deportation of former Beatle John Lennon and his artist wife Yoko Ono, the circumstances of which have inspired many films, documentaries and literary works. The hallmark of the firm remains its prompt, personal and efficient service.  With more than a dozen experienced attorneys, the firm’s multi-lingual staff is committed to producing swift, positive outcomes for their clients.
Today, the firm is also located in Miami, Florida and its practice area is still limited exclusively to U.S. Immigration and Nationality Law. And while the firm still prides itself on individualized attention, its practice area has expanded to include representation of prominent American and International firms, banks, industrial, financial and manufacturing concerns and law firms in connection with the personnel needs of their foreign national employees.  In addition, the firm has a distinguished clientele and has done substantial immigration work for performing artists, directors, writers, models, actors/actresses, athletes, fine artists, art dealers, curators, and literary agents.
As Mayor of Englewood, Michael believed that it was important for the people he represented to have easy access to both himself and the Englewood Government. He runs his law practice in the same vain as he continually provides immigration workshops to the community at large, free of charge, meets aspiring young lawyers for coffee to discuss their future in the legal profession, mentors his students from his Business Immigration Law class, (Michael is an Adjunct Professor at the Benjamin N. Cardozo School of Law), and offers sound advise on the many professional panels he attends.