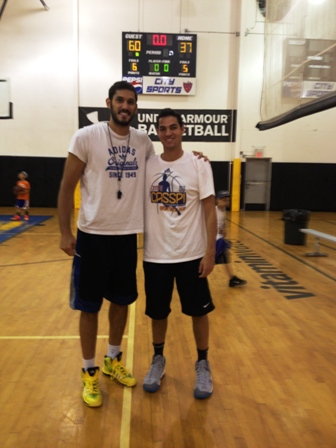 Pictured here is Josh Wildes, son of Managing Partner Michael Wildes, a budding lawyer and basketball enthusiast, with Israeli professional basketball player Omri Casspi at the 2013 Omri Casspi Basketball Camp in Partnership with Tamir Goodman, where Josh served as a role model and coach to young players.
With the NBA Summer League wrapping up, fans are looking forward to the 2015 National Basketball League Season. After an exciting, deep draft class, many teams are looking more promising than ever. Interestingly enough, many of these teams selected international players from all over the world. There were 20 players who were chosen by teams that are not from America, including the first overall pick and Canadian citizen, Andrew Wiggins. They come from various places including Croatia, Greece, Australia, Cameroon, Serbia, Brazil, Switzerland, France, and more. While their talent is unparalleled and they are getting ready for the next chapter of their lives, all of these players will be facing the same issue: getting a U.S. visa.
The ‘P’ visa is a type of temporary employment visa often issued to international artists, athletes, entertainers, and their spouses ad children. While it seems simple at its core, there are various types of ‘P’ visas that these athletes and their teams must consider. Here is a listing of the ‘P’ visa classifications that are issued by the United States Government:
P-1, Athletes and Entertainers
In the case of athletes performing as individuals or teams, and artists performing as part of an internationally recognized entertainment group are issued P-1 visas. The group must be based abroad, and at least 75% of its members must have been with the group for one year or more. A petition must be filed with the U.S. Immigration Service, by a U.S. agent, presenter or employer, attaching a contract and itinerary stating where and when the group will perform or compete. Like the O-1, the P visa requires consultation with appropriate labor unions, or peer groups in occupations where there is no union. The maximum period of initial admission for an athlete is five years, for a team it is one year, and for an entertainment group, up to one year, if supported by contracts and itinerary.
P-2, Athletes and Entertainers (Reciprocal Exchange)
Athletes and entertainers entering the United States to perform under reciprocal exchange programs are issued P-2 visas. This category is not petition based, and generally does not require labor consultation because the reciprocal exchange is customarily between two unions, one operating in the U.S. and one abroad.
P-3, Athletes and Entertainers (Culturally Unique)
Athletes and entertainers entering to perform in a culturally unique program are issued P-3 visas. The individual or group must show some evidence of distinction in the art form or sport (such as flamenco, Kabuki, or capoeira). Like the P-1, a majority of the group must have worked together for at least a year. A petition must be filed with the immigration service by a U.S. agent, presenter or employer, attaching a contract and itinerary stating where and when the group will perform or compete, and a labor advisory opinion from a union or peer group is required. The maximum period of initial admission is three years, if supported by proper contracts and itinerary, and P-3 status may be extended for a maximum stay of five years.
With offices in New York, New Jersey and Florida, Wildes & Weinberg, P.C., perhaps the United States’ premier law firm concentrating in the immigration and nationality field, grew out of the practice of Leon Wildes, Esq., a distinguished immigration practitioner in New York City. Its original clientele consisted of individuals, rather than corporations, who had been placed in deportation or exclusion proceedings, lost their American citizenship, or were otherwise in jeopardy. Founded in 1960, the practice expanded steadily as word of its outstanding achievements in individual cases spread in the international community, attracting clients from a broad range of nations.
Wildes & Weinberg prides itself on its international athletic clients, including  Pelé, Greg Norman, Eric Cantona, Virginia Wade and more, including foreign NBA players. We are excited for these international stars to play basketball here in America. But, before they storm the courts and our media, we hope they choose the right Visa! Congratulations to all those players, especially international, selected in the NBA 2014 Draft!