a lawyer and a scholar – leon wildes 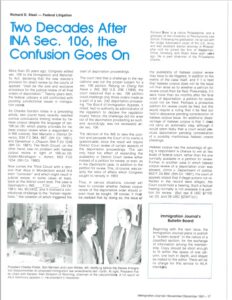 In 1970 he was National President of the American Immigration Lawyers Association (AILA) and has served as a member of its board of governors ever since. AILA conferred upon him its Edith Lowenstein Award for Outstanding Contributions to the Field of Immigration Practice, and he was also awarded the Elmer Fried Prize for Excellence in Teaching Immigration Law. Best known for his successful representation of former Beatle John Lennon and his artist wife Yoko Ono in deportation proceedings, he has published 5 law review articles on issues of law raised in the extraordinary litigation connected with that case. Mr. Wildes’ is also the proud author of John Lennon vs. the USA: The Inside Story of the Most Bitterly Contested and Influential Deportation Case in United States History, which was published by Ankerwycke Books, an imprint of ABA Publishing, a division of the American Bar Association and became available in August 2016.

Wildes & Weinberg, P.C. was founded in 1960. The firm specializes exclusively in the practice of U.S. immigration and nationality law, has a distinguished domestic and international clientele, and can assist with any type of immigration matter including employment and investment-based immigration, work permits, permanent residence for qualified individuals, family-based immigration, asylum applications, all temporary and permanent type visas, and U.S. citizenship.  Moreover, the firm is internationally renowned for its successful representation of distinguished individuals and corporate clients such as performing artists, directors, writers, models, actors/actresses, athletes, race car drivers, fine artists, art dealers, curators, musicians, photographers, stylists, and literary agents. Some of the firm’s distinguished clients include scholar Rabbi Lord Jonathan Sacks (z”l), as well as soccer icon Pele, Master Chef Jean-Georges and Former First Lady Melania Trump and her family.