Wildes & Weinberg, P.C. Managing Partner Michael Wildes, a former federal prosecutor and current mayor of Englewood, New Jersey is pleased to announce that Howard Sabin, who grew up in New York City and Torino, Italy, has chosen Englewood, New Jersey to create his monumental bronze sculpture depicting “A Soldier’s Journey” for the New National World War I Memorial in Washington, DC.  The sculpture is being created by Sabin and his team in clay in the Englewood studio and then will be cast in bronze prior to its installation in the park.  December 2019 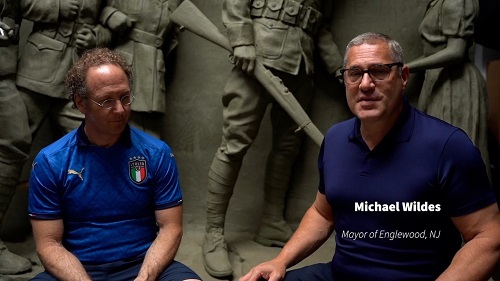 To see what the finished sculpture will look like follow this link https://sabinhoward.com/WW1cc/ and to learn more about the World War I memorial park click here: https://www.prnewswire.com/news-releases/us-world-war-i-centennial-commission-receives-construction-permit-for-new-national-world-war-i-memorial-in-washington-dc-300974392.html