Music icon Boy George, the front man and lead singer for Culture Club, offers words of praise for Managing Partner Michael Wildes’ book Safe Haven in America: Battles to Open the Golden Door, which draws on over a quarter of a century of his practice in the Immigration field. Boy George had this to say about Safe Haven:

“I needed an expert lawyer to resolve my immigration issues, and I found him in Michael Wildes. Michael’s book is a must-read for history buffs and anyone who cares at all about immigration, human rights, and dignity. Michael Wildes is a great lawyer. Loved his history and his advice! If his family was good enough for John Lennon, they’re good enough for me!” 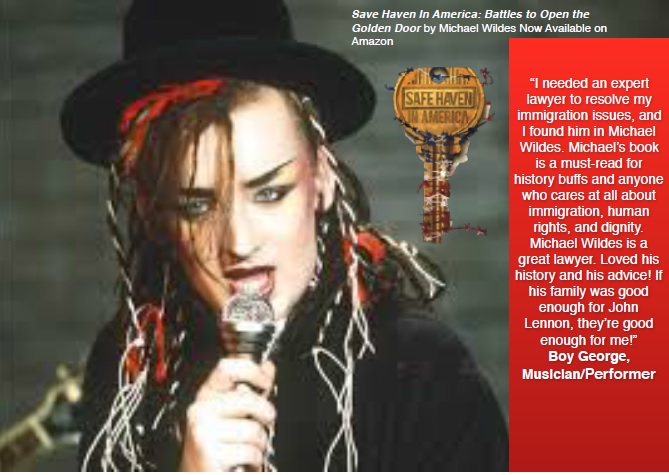 George Alan O’Dowd, p/k/a “Boy George,” is a Grammy-award winning singer and musical performer who has risen to the level of international music legend. As the lead member of the iconic pop band Culture Club, which was founded in the 1980s, Boy George and the band have toured  world-wide, securing many top song/album positions on the charts as well as winning numerous awards. This success and fame in music spans decades. Of late, Boy George has been invited to participate in several hit TV shows, including most starring as a judge on “The Voice U.K.”  It has been reported that MGM will soon be producing a feature film based on the life of Boy George.

For more information visit the firm’s website at www.wildeslaw.com  or contact michael@wildeslaw.com to schedule a consultation or for media inquiries.