Managing Partner Michael Wildes Pens Article, “The Language Of The Future:  Fashion, Technology and Immigration” for Fashion Mannuscript, a monthly magazine distributed throughout the country which provides extensive photo coverage of  events, topical columns by experts in the community, and profiles people and companies that make the fashion business what it is today.  Michael’s firm, Wildes & Weinberg, has successfully assisted many talented industry individuals with their U.S. Immigration needs. 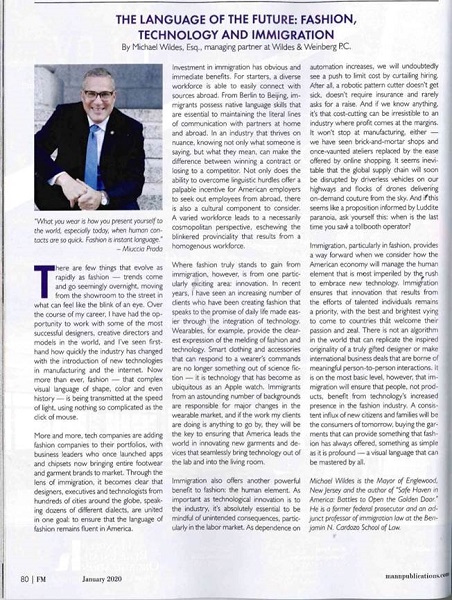 Michael Wildes, a former federal prosecutor and the current mayor of Englewood, New Jersey, is also second generation U.S. immigration lawyer, and Professor of Business Immigration Law at the Benjamin N. Cardozo School of Law.  He is considered an expert in the field of U.S. Immigration and Nationality Law.  Mr. Wildes has testified on Capitol Hill in connection with anti-terrorism legislation, and is internationally recognized for his successful representation of many defectors who have provided difficult to obtain national security information to the U.S. In addition to rotating his time between his four offices (New York City, New York,  Englewood, New Jersey, Miami, Florida, and Los Angeles, California), Michael Wildes is also a regular participant on professional panels as well as a frequent commentator and legal analyst on network television and radio.