Managing Partner Michael Wildes welcomes the firm’s newest associates – Nicole Gunara and Joseph Caraccio.  Nicole and Joseph are seated in the New York City office of the firm but are available to assist with U.S. Immigration and Nationality issues throughout all 50 States. 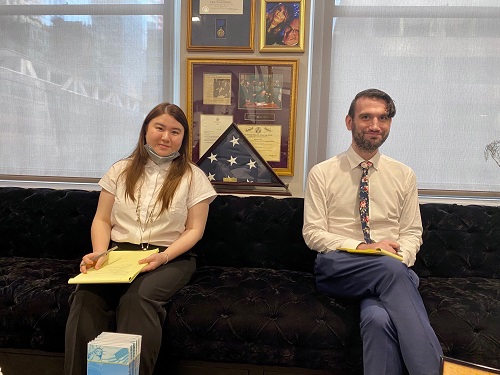 Nicole Gunara holds a B.A. in Political Science and Economics from Bard College at Simon’s Rock (2014), a Grande Diplôme from the International Culinary Center (2015), and a J.D. with a concentration in Business and Financial Law from Fordham University (2019). She is admitted to practice law in the States of New York and New Jersey. Nicole is fluent in Bahasa Indonesia.

Nicole has extensive experience in filing a wide-range of complex employment-based visas, extraordinary ability visas, and investment-based visas in addition to handling residential real estate transactions. During her time at Fordham, she participated in the Entrepreneurial Law clinic where she advised emerging businesses on entity formation, employment issues, and capital raising.

Joseph Caraccio is a graduate of New York Law School in 2012, where he was the President of the New York Law School Chapter of the Federalist Society. Joseph is licensed to practice law in the State of New York, the District of Columbia and the Department of Justice Executive Office of Immigration Review, and several Federal District and Circuit Courts. He is a member of the New York State Bar Association, American Immigration Lawyers Association, and many local grassroots organizations advocating for immigrant rights and government reform. Prior to attending law school, Joseph lived in Mexico City where he studied Mexican Culture Studies and Conversational Spanish at Universidad Iberoamericana.

Joseph has been practicing immigration law since 2012. His legal practice is focused on helping immigrants obtain legal status in the United States and defending those who face removal (deportation). Most of his current caseload involves the representation of individuals in removal proceedings, Federal Court litigation, and complicated visa matters.

Joseph has also participated on panels at events at law schools in New York City discussing immigration law and twice served as a moot court judge at the International Immigration Law Moot Court Competition at NYU Law School. He was recognized by Thomas Reuters as a Super Lawyer in immigration law in the years of 2017-2021. Martindale-Hubbell recognized him as a Client Champion in 2018-2020, based on the number of five-star reviews and recommendations he received from former clients.

Wildes & Weinberg was founded in 1960 by Senior Partner, Leon Wildes.  Nearly three quarters of a century later, the firm continues to concentrate its practice in all aspects of U.S. immigration and nationality law, servicing the immigration requirements of prominent American and International firms, banks, industrial, financial and manufacturing concerns, as well as law firms in connection with the personnel needs of their foreign national employees.  In addition, the firm has a distinguished clientele and has done substantial immigration work for performing artists, directors, writers, models, actors/actresses, athletes, fine artists, art dealers, curators, and literary agents. Most notable was Leon Wildes’ successful representation of former Beatle John Lennon and his artist wife, Yoko Ono in their deportation proceedings, the basis of which has inspired legislation, and has been portrayed in films, plays, and literary works worldwide.