john lennon vs the u.s.a published

MANAGING PARTNER MICHAEL WILDES IS PLEASED TO SHARE THE FIRST PICTURE OF FOUNDING PARTNER LEON WILDES AS HE RECEIVES A HARDCOPY OF HIS NEWLY AUTHORED BOOK JOHN LENNON vs THE U.S.A 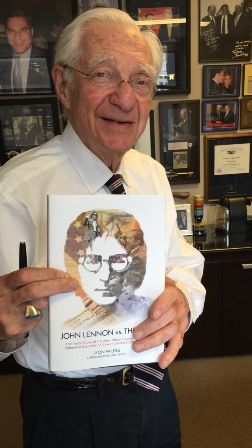 Founded in 1960, Wildes & Weinberg, is perhaps best known for Leon Wildes’ representation of former Beatle John Lennon and his wife Yoko Ono. Between 1972 and 1976, Leon represented Lennon and Ono in their struggle to remain in the United States, despite the concerted attempts of the Nixon Administration to deport them.

The book, aptly titled John Lennon v. The U.S.A., will be published by Ankerwycke Books, an imprint of ABA Publishing, a division of the American Bar Association and will be available in August, 2016. It can be purchased on Amazon at: http://www.amazon.com/John-Lennon-vs-The-U-S-A/dp/1634254260