Founding Partner Leon Wildes was recently interviewed by Associated Press regarding his representation of John Lennon, and how the case relates to the current argument regarding the President’s legal authority to defer deportation.
To view the Associate Press article, entitled How John Lennon Affects Today’s Immigration Fight, please click here.
The article also appeared in the September 4, 2014 Billboard Bulletin.
Wildes & Weinberg, P.C. Founding Partner Leon Wildes is best known for his successful representation of John Lennon and Yoko Ono.
Between 1972 and 1976, Leon Wildes represented Lennon and Ono in their struggle to remain in the United States, despite the concerted attempts for the Nixon Administration to deport them.
The case (which included bringing four separate Federal lawsuits) not only resulted in John and Yoko getting their green cards and being able to remain in the United States, but it also led to substantial changes in immigration law and brought to light secretive government practices and undue political influence, and has resulted in greater transparency in the U.S. immigration system. 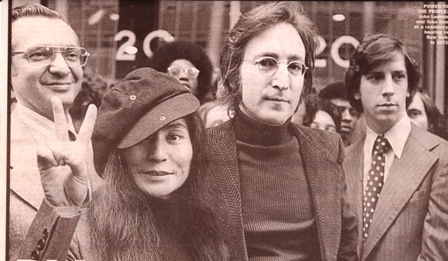 For nearly six decades, Wildes & Weinberg, has concentrated its practice in all aspects of U.S. immigration and nationality law, servicing the immigration needs of prominent American and International firms, banks, industrial, financial and manufacturing concerns, and law firms in connection with the personnel needs of their foreign national employees. In addition, the firm has a distinguished clientele and has done substantial immigration work for investors, scientists, physicians, bankers, performing artists, directors, writers, models, actors/actresses, athletes, fine artists, art dealers, curators, and literary agents.
Today, the firm consists of over forty individuals solely dedicated to the practice of U.S. Immigration and Nationality Law and the multi-lingual staff is spread throughout the New York City, Englewood, New Jersey, and Miami, Florida offices.
Despite difficulties currently being encountered in dealing with U.S. immigration authorities, the firm has maintained an extraordinary track record for success in its cases.