Wildes & Weinberg, P.C., America’s preeminent immigration law firm and O visa experts, is pleased to announce that its Managing Partner, Michael Wildes, secured an O-1 visa for Rabbi Lord Jonathan Sacks. The Rabbi is scheduled to be a Visiting Professor at two noteworthy American educational institutions, Yeshiva University and New York University.  In addition, he will be a featured scholar-in-residence and keynote speaker in other Jewish institutions throughout the United States. 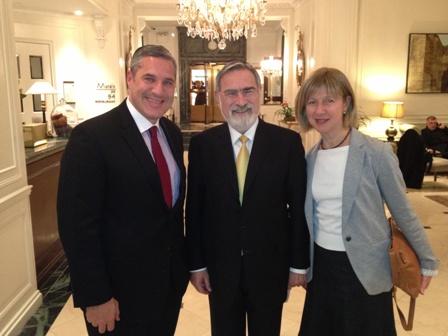 The O-1 visa to the United States is available to an individual who possesses “extraordinary ability” in the sciences, arts, education, business, or athletics or who has a demonstrated record of extraordinary achievement in the motion picture or television industry and has been recognized nationally or internationally for those achievements. To qualify for an O-1 visa, an a pplicant must demonstrate extraordinary ability by showing that the  individual has reached a level of expertise that is shared by only a small percentage of people, prove sustained national or international acclaim, and must be coming temporarily to the United States to continue to work in the area of his or her extraordinary ability. Rabbi Lord Sacks held a position of distinction as Chief Rabbi of the United Hebrew Congregations of the Commonwealth from 1991 to 2013.  He was the sixth incumbent since the role was formalized in 1845.  Prior to this, he served as Principal of Jews College as well as Rabbi of the Golders Green and Marble Arch synagogues, both located in the United Kingdom. No stranger to academia, he holds 14 honorary degrees, including a Doctor of Divinity, and has been a visiting professor at several universities throughout Britain, the United States and Israel. Moreover, the Rabbi has merited numerous prizes and received substantial recognition above that which is ordinarily encountered.  As a prominent author of more then 24 books, the Rabbi is a frequent contributor to radio, television, and national press.

The attainment of an O-1 visa for Rabbi Lord Jonathan Sacks represents yet another success for Wildes & Weinberg, P.C. as the firm has served as immigration counsel to an esteemed roster of renowned clientele who wish to pursue careers in the United States, including former Beatle John Lennon and his artist wife Yoko Ono. Other notable clients of the firm include soccer icon Pele and other professional athletes such as Eric Cantona, Greg Norman, Virginia Wade, Billy Smith, Al Arbour, and Kwame James, the former professional basketball player who subdued the would-be “shoe bomber” Richard Reid on a trans-Atlantic flight. Other notable clients of the firm include Joe Cocker, Brian Dennehy, Johnny Rotten, Paloma Picasso, the 2011, 2010, 2009 and 2008 Miss Universes, supermodel Giselle Bundchen and Sarah Brightman, the world’s bestselling female classical artist of the twenty-first century.