First Lady Melania Trump offers words of praise for Managing Partner Michael Wildes’ book Safe Haven in America: Battles to Open the Golden Door, which draws on over a quarter of a century of his practice in the Immigration field. The First Lady had this to say about Safe Haven:

“I thank Michael Wildes for his counsel in reviewing my own path to the American Dream, for his knowledge and professional dedication, not to mention his warmth and concern. He has shown himself to be a scholar in this field.” 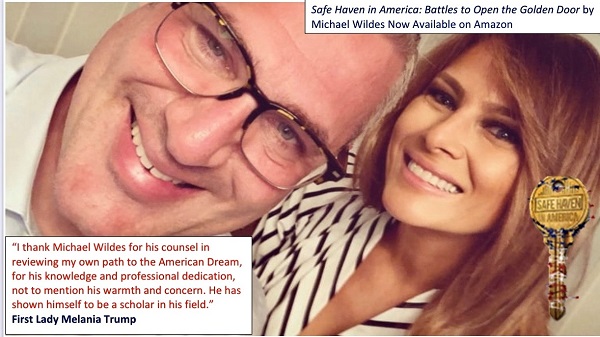 Melania Trump is a Slovenian-American former fashion model and the current First Lady of the United States. Managing Partner Michael Wildes has been tasked to speak on behalf of Mrs. Trump’s immigration journey and has assisted with the U.S. Immigration needs of her family members.

In addition to running a highly successful immigration law practice, Michael is a three-term mayor in Englewood, New Jersey, an Adjunct Professor at the Benjamin N. Cardozo School of Law in New York, and serves as Counsel to Lincoln Center and several international/corporate law firms. Moreover, Michael is internationally renowned for his successful representation of notable individuals and corporate clients such as performing artists, directors, writers, models, actors/actresses, athletes, race car drivers, fine artists, art dealers, curators, musicians, photographers, stylists, and literary agents. Some of the firm’s clients include scholar Rabbi Lord Jonathan Sacks, as well as soccer icon Pele, and Master Chef Jean-Georges, among many other distinguished individuals.

Despite difficulties currently being encountered in dealing with U.S. immigration authorities, Wildes & Weinberg has maintained an extraordinary track record for success for its cases.  Moreover, the firm’s multilingual staff is known for its experience and special expertise in processing each foreign national’s case with nothing less than the highest level of professionalism.

For more information visit the firm’s website at www.wildeslaw.com  or contact michael@wildeslaw.com to schedule a consultation or for media inquiries.