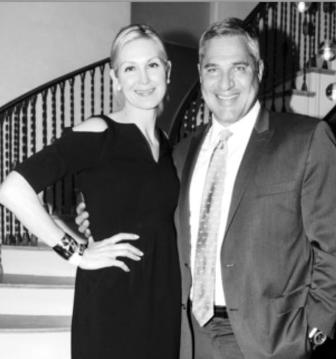 Prior to specializing in U.S. Immigration and Nationality Law, Managing Partner Michael Wildes was a former Federal Prosecutor with the United States Attorney’s Office in Brooklyn (1989-1993). This past week, he appeared with Kelly Rutherford, best known for her television roles as Stephanie “Sam” Whitmore on the NBC daytime soap opera Generations, as Megan Lewis on the Fox primetime soap opera Melrose Place, and as Lily van der Woodsen on The CW series Gossip Girl, in attempt to keep her U.S. citizen children in the United States. Kelley’s ex-husband was born in Germany and is now living in France with the children.  Kelly is working hard to overrule a California judge’s custody order and to force the U.S. government to renew her children’s father’s visa so that children can live in the United States with both parents.
According to Kelly “I went bankrupt fighting to keep my own children in my own country as a U.S. citizen…My ex-husband got kicked out of the country and my children are with him,” she added. “I’m not the one that got my visa revoked.”
To view New York Daily News article, please click here.
In addition to serving as the firm’s Managing Partner, Michael Wildes has testified on Capitol Hill in connection with anti-terrorism legislation and is internationally renowned for his successful representation of several defectors who have provided difficult to obtain national security information. He is frequently a legal commentator/analyst for network television and radio and is an Adjunct Professor of Business Immigration Law at the Benjamin N. Cardozo School of Law in New York. From 2004 through 2010, Mr. Wildes was also the Mayor of Englewood, New Jersey–where he resides.
For nearly six decades, Wildes & Weinberg, has concentrated its practice in all aspects of U.S. Immigration and Nationality law, servicing the needs of prominent American and International firms, banks, industrial, financial and manufacturing concerns, and law firms in connection with the personnel needs of their foreign national employees.
In addition, the firm has a distinguished clientele and has done substantial immigration work for investors scientists, physicians, bankers, performing artists, directors, writers, models, actors/actresses, athletes, fine artists, art dealers, curators, and literary agents.
To learn more about the U.S. Immigration and Nationality law, please visit our Immigration 101 page or contact Managing Partner Michael Wildes at michael@wildeslaw.com.