Beginning in 2012 Managing Partner Michael Wildes represented Mr. Rezai Karim, a young professional and college graduate who accepted a computer engineering position and moved to Roanoke, Virginia for a better life in the Summer of 2016.  Rezai Karim was viciously attacked and stabbed on the evening of Saturday, August 20, 2016 as he was entered his apartment with his girlfriend, allegedly by a suspected ISIS terrorist Wasil Farooqui. It appears that Wasil Farooqui had been on the FBI‘s radar for several months and he is believed to be self-radicalized. CBS News reported that Farooqui had tried to go to Syria earlier this year, but only got as far as Europe. Witnesses told police that Farooqui was yelling “Allah Akbar” and law enforcement sources told CBS News the FBI is investigating whether the knife attack was possibly inspired by ISIS. Mr. Karim and his girlfriend fully cooperated with the FBI and local Police Investigators. Newsweek featured their story on December 12, 2016. To read the article in its entirety, please click here.

After learning of the sentencing, Michael released this statement:

Today, justice was partially served with the sentencing of Wasil Farat Farooqui by a criminal court in Roanoke County, Virginia.  Last August, Farooqui pleaded guilty to stabbing Mr. Rezai Karim and his fiancée Taramati Harold the previous year, while the couple were returning to their apartment.  Both Mr. Karim and Ms. Harold suffered life threatening injuries.

For Mr. Karim, however, the fight for justice continues. Following the attack, Mr. Karim provided vital assistance to law enforcement during Farooqui’s prosecution.  Wildes and Weinberg is honored to represent Mr. Karim, who is now fighting for his right to remain in the United States.  Brought to the United States as a child, his status under DACA remains in legal limbo following the Trump’s abrupt recission of the program, which had provided protections to hundreds of thousands of similarly situated individuals.  Our firm is pursuing other options for Mr. Karim, most notably by leveraging his valuable work assisting the police and prosecutors who today put Farooqui behind bars for the foreseeable future. 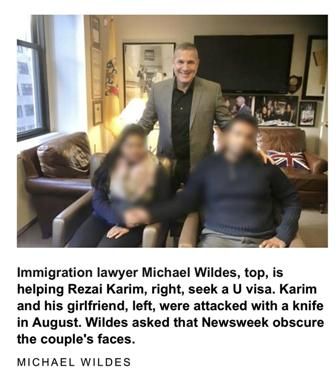 More than fifty eight years since its inception Wildes & Weinberg continues to service a distinguished domestic and international clientele and covers all areas of U.S. immigration law, including employment and investment-based immigration, work permits, permanent residence for qualified individuals, family-based immigration, asylum applications, all temporary and permanent type visas, and US citizenship. Despite difficulties currently being encountered in dealing with U.S. immigration authorities, the firm has maintained an extraordinary track record for success in its cases.