Ted W. Lieu is a Democratic member of the United States House of Representatives, representing California’s 33rd congressional district since 2015. Prior to this position, he served as a California State Senator, who represented the 28th Senate District from 2011 to 2015, after being elected to fill the seat of deceased Senator Jenny Oropeza. From September 2005 to November 2010, Congressmen Lieu was also a California State Assemblyman who represented the 53rd Assembly District. 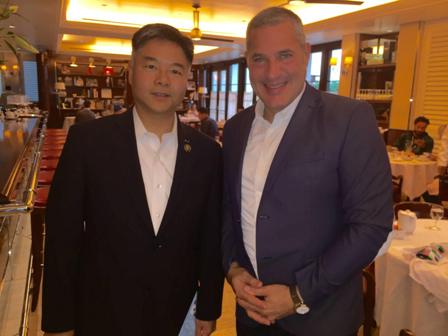 Michael Wildes, considered by many to be an O visa expert lawyer, represents many talented and extraordinary individuals in Congressmen Lieu’s district. In addition to having a bond through immigration, Michael and Congressmen Lieu share a love for politics and community service as Michael is no stranger to local government. From a young age, he has been committed to public service, beginning as a member of Community Board No. 6 in New York and working his way up to Mayor of Englewood, New Jersey (www.michaelwildes.org). Further, he has volunteered his time to help with many campaigns, was a summer intern for  Congressman Gary Ackerman and Congresswoman Geraldine Ferraro, served as an Auxilliary Police Officer in Forest Hills, began his legal career as a  Special Assistant United States Attorney in the Eastern District of New York, has testified on Capitol Hill in connection with anti-terrorism legislation, is a Certified EMT with Hatzoloh, and is currently a second generation immigration attorney and Adjunct Professor of Law at the Benjamin N. Cardozo School of Law. In addition, Michael has represented the United States government in immigration proceedings and is a frequent participant on professional panels and commentator on network television and radio with regard to US immigration law, employer sanction work and compliance.

Founded in 1960 by Michael’s father, Leon Wildes, whose best-known accomplishment was his successful representation of John Lennon in his widely publicized deportation proceedings, the circumstances of which have inspired several films and documentaries, Wildes & Weinberg specializes exclusively in the practice of U.S. immigration and nationality law. More than fifty five years since its inception the firm continues to serve a distinguished domestic and international clientele and covers all areas of U.S. immigration law, including employment and investment-based immigration, work permits, permanent residence for qualified individuals, family-based immigration, asylum applications and all temporary and permanent type visas.

Today, the firm of Wildes & Weinberg, maintains offices in New York City, New York, Englewood, New Jersey,  Miami, Florida, and just announced that it will be expanding to California in the near future,  and continues to maintain its stellar reputation in the field of U.S. Immigration & Nationality Law.