Managing Partner Michael Wildes is pleased to announce that he has secured a renewal of O-1 extraordinary ability visa classification on behalf of music icon Boy George, the front man and lead singer for Culture Club. 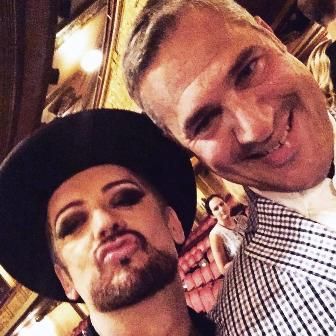 George Alan O’Dowd, p/k/a “Boy George”, is a Grammy-award winning singer and musical performer who has risen to the level of international  music legend. As the lead member of the iconic pop band Culture Club, which was founded in the 1980s, Boy George  and the band have toured  world-wide, securing many top song/album positions on the charts as well as winning numerous awards. This success and fame in music spans several decades. Of late, Boy George has been invited to participate in several hit TV shows, including most recently starring as a judge on “The Voice U.K.”  According to Michael Wildes, “ In light of the multitude of supporting documentation presented, it comes as no surprise that Boy George’s visa was renewed as he clearly is blessed with extraordinary ability and talent and I look forward to watching his successes continue on our shores.”

Boy George stated: “Thank you Michael Wildes for the visa: Excellent work; Swift; and Beautiful..I’m in! Love you Michael”

More than fifty eight years since its inception Michael and his staff at Wildes & Weinberg continue to specialize exclusively in the practice of U.S. immigration and nationality law and serve a distinguished domestic and international clientele with the immigration needs of their foreign  personnel in areas such as employment and investment-based immigration, work permits, permanent residence for qualified individuals, family-based immigration, asylum applications, as well as all other temporary and permanent type visas.

For more information on the O-1 visa category, which allows individuals of extraordinary ability in the arts, sciences, athletics, education and business to live and work in the United States, please visit our Immigration 101 page or contact Managing Partner Michael Wildes at  michael@wildeslaw.com.