Managing Partner Michael Wildes is pleased to announce that he has secured an O-1 work visa for María Gabriela Isler, Miss Universe 2013.  She has been approved for her U.S. visa based on her outstanding work in her field.
“As part of her duties as Miss Universe, Gabriela will be traveling the U.S.and the world,”  said Michael Wildes, Managing Partner of Wildes & Weinberg. “To travel and work in the US, Miss Isler needed to obtain a Visa.  We were happy to assist her to obtain her visa so she can tour the U.S.”
Maria Gabriela Isler represented Venezuela at the Miss Universe 2013 pageant, held on November 9 in Moscow, Russia. She was crowned Miss Universe 2013 by outgoing titleholder, Olivia Culpo of the USA. With Isler’s win, Venezuela has produced seven victories in the history of the pageant and has won three crowns in their last six attempts since 2008, maintaining its status as the second most successful country at Miss Universe.
“This marks the sixth Miss Universe our firm has represented. We have obtained green cards for: Dayana Mendoza, Miss Universe 2008, Stefania Fernandez, Miss Universe 2009, several O visas for Jimena Navarrete, Miss Universe 2010 and Leila Lopes, Miss Universe 2011.  My father, Leon Wildes, previously assisted Rita Messinger, Miss Universe 1976, acquire U.S. citizenship,” said Wildes. “These young ladies have a lot of work to do in the year they hold the Miss Universe title and it comes with global responsibility.  It’s a pleasure to make their jobs that much easier.  Our firm knows their needs and is able to get things done quickly,” concluded Wildes.
RELATED COVERAGE: Fox New Latino article, Miss Universe Gets Visa to Live and Work in the U.S., Green Card May Be Next 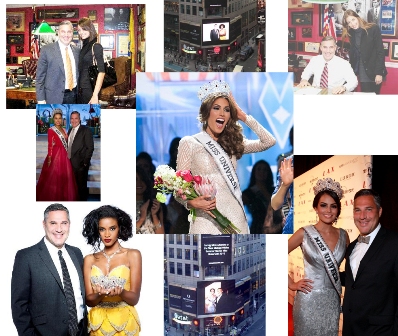