NEW YORK, NY, July 20, 2010 – Michael Wildes of Wildes & Weinberg P.C. is pleased to announce that Stefania Fernandez, Miss Universe® 2009, has been approved for a green card based on her extraordinary ability and her global philanthropic efforts.

Michael Wildes is a managing partner of Wildes & Weinberg, P.C., the premier law firm specializing exclusively in the practice of U.S. immigration and nationality law. With offices in Manhattan and New Jersey, the firm has built a sterling reputation across a broad spectrum of industries. 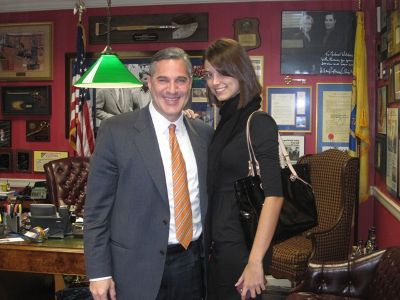 Fernandez joins Dayana Mendoza, Miss Universe® 2008, on an elite list of celebrities and tastemakers that have relied on Wildes & Weinberg, P.C. for its expert counsel. Established in 1960, founder Leon Wildes set the precedent by working with John Lennon, Yoko Ono and Miss Universe 1976. From the fashion and music industries to professional sports, the firm now serves esteemed clientele including Ferragamo, Valentino, Bvlgari, Gisele Bündchen, Vera Wang, Greg Norman and Virginia Wade, as well as professionals in the film and entertainment industries, NBA and NHL athletes, boxers, musicians, etc., all in their effort to secure top talent from abroad for temporary and permanent transfers to the United States.

Wildes is also a former two-term mayor of Englewood, New Jersey and a former federal prosecutor with the U.S. Attorney in Brooklyn. In addition to his expertise in the fashion industry, Wildes has become internationally-renowned for his successful representation of terrorists providing hard-to-obtain national security information to the United States, and for obtaining an injunction to prevent Libyan leader Moammar Qadhafi from residing in New Jersey during the 2009 U.N. Summit. He is recognized by the Democratic Party as a leading fundraiser for congressional and senate candidates and was voted one of the “100 National Up and Coming Leaders to Watch” by the Democratic Leadership Council.

Renowned immigration attorney Michael Wildes is pleased to announce that Stefania Fernandez, Miss Universe® 2009, has been approved for a green card based on her extraordinary ability and global philanthropic efforts. Fernandez is now proudly on her way to U.S. citizenship. The pair is pictured here at the offices of Wildes & Weinberg P.C. on Madison Avenue in New York City.