Saudi Diplomat/Defector Mohammed Khilewi offers words of praise for Managing Partner Michael Wildes’ book Safe Haven in America: Battles to Open the Golden Door, which draws on over a quarter of a century of his practice in the Immigration field. Mr. Khilewi had this to say about Safe Haven:

“Any competent lawyer may be fine for common immigration problems. But when it’s a question of life or death – like defecting from an absolutist state – I’d want no one but Michael Wildes on my side.” 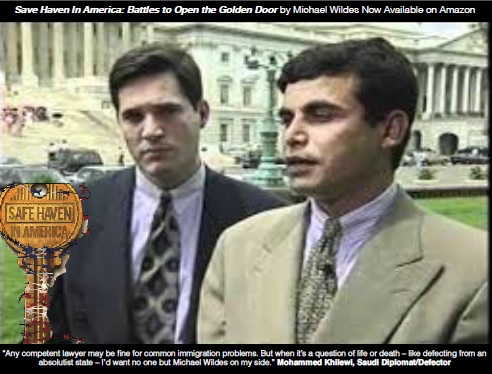 Michael Wildes helped to secure asylum for Mohammed Khilewi, a former Saudi diplomat to the United Nations whose life was being threatened. Khilewi, who had been the No. 2 man at the Saudi Arabian Mission, was made the target of a terror squad that meant to kidnap him and return him to his native land.  He maintained that the Saudi government was planning to assassinate Washington diplomats and had bugged the offices of the Jewish Defense League. Under protection of the Capitol Police and wearing flak jackets, Wildes and the former ambassador went to Washington, where they spoke with congressional leaders about Khilewi’s need for asylum, which was ultimately granted, and resulted in more than 14,000 documents being turned over to the FBI.

For more information visit the firm’s website at www.wildeslaw.com  or contact michael@wildeslaw.com to schedule a consultation or for media inquiries