wildes and weinberg maintain its strong legacy of securing u.s. visas and green cards for extraordinary athletes and artists

On Tuesday, June 4, 2013, Wildes & Weinberg, P.C., Managing Partner, Michael Wildes and Pele, Brazilian Soccer Icon, witnessed the relaunch of the New York Cosmos as they signed a jersey sponsorship with Emirates Airlines. The new team will play its first game in the North American Soccer League on August 3, 2013 at Stuart Stadium in Hempstead, NY as they take on Fort Lauderdale.

In April, 2011, Wildes announced that he had secured an O-1 visa for Pele, who joined the New York Cosmos as Honorary President. The basis of Pele’s application rested on the fact that he was an “Alien of Extraordinary Ability”.  U.S. immigration regulations require that certain athletes who desire to work or play for a professional sports team for an extended period of time obtain O or P visas.

Though often difficult to secure for many athletes, the attainment of an O-1 visa for Pele represents yet another success for Wildes & Weinberg as the firm has served as immigration counsel to an esteemed roster of renowned clientele in professional sports including Greg Norman, Virginia Wade, Billy Smith, and Al Arbour, all in their efforts to pursue careers in the United States.  Michael Wildes also assisted in securing U.S. citizenship for former professional basketball player Kwame James, who subdued the would-be “shoe bomber” Richard Reid on a trans-Atlantic flight. 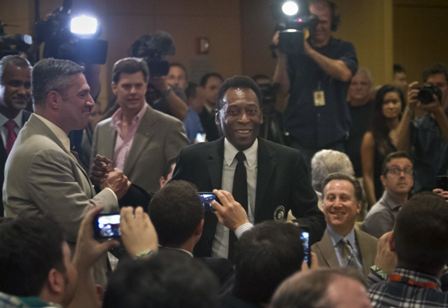